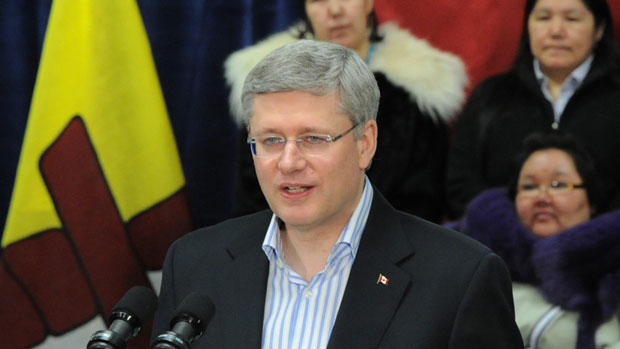 Canada’s Prime Minister Stephen Harper flew to a frigid Iqaluit, a town in Canada’s eastern Arctic, to deliver $27 million for adult basic education in the North – an attempt to help high-school dropouts qualify for productive jobs.

The money will be spread over five years and shared by three colleges, one in each of Canada’s three territories: Yukon, Northwest Territories and Nunavut.

“By improving access to adult basic education, we are giving Northerners the tools they need to seek higher education and secure employment in sectors that contribute to Canada’s economic growth,” Harper said.

Harper has frequently stressed that education levels among aboriginal peoples need to improve if they are ever to find prosperity. But he is under intense pressure from native leaders to put up some serious money behind his words.

The Liberal aboriginal affairs critic called Harper’s announcement paltry compared with the needs of the North.

“The prime minister’s drive-by announcement today provided nowhere near the kind of resources for education, social housing, mental health, drug treatment and food security desperately needed in the North in order to improve the health, education and well-being of northern Canadians,” MP Carolyn Bennett said in a release.

“If Canada is to truly benefit from the opening of the Arctic, there must be focused federal investment in northern communities.”

Funding for colleges in territories

The federal government has been working with the Assembly of First Nations for more than a year to put together a complete overhaul of the funding and governance scheme for education on reserves. But despite holding a high-profile summit with First Nations leaders in January, Harper has yet to contribute anything concrete to improving schooling for aboriginals.

There are signs the government may be prepared to take modest action in the coming spring budget.

Thursday’s funding, however, is small compared with the billions in annual funding increases that Inuit and First Nations groups say they need.

It is meant to boost literacy and numeracy skills among people who have not finished high school.

There are many, many such people in the North. The Inuit Tapiriit Kanatami has estimated that only a quarter of Inuit students finish high school. The 2006 census suggests the level is about half. Regardless, the graduation rate is drastically lower than the rest of the population.

The funding pays for educators, resources and assessment tools which are meant to help under-educated adults gain skills that can be put to use in their local labour markets.

In Nunavut, the unemployment rate is also much higher than the national average, at 25 per cent.

But funding for aboriginal schooling has long been capped to rise at two per cent a year, and is substantially lower than for non-native schools.

Many aboriginal schools are dilapidated, without libraries or gyms or proper equipment. And First Nations leaders have long complained that funding is capped at increases that can’t surpass two per cent a year, despite the cost of teachers being far higher than that.

Harper has travelled frequently to the Arctic, but the trip to Iqaluit is only his second visit in the dead of winter.

While the sovereignty of the North is clearly his priority, he has faced criticism for focusing on military efforts while ignoring the social conditions of the people who actually live there.

The suicide rate among the Inuit is about nine times higher than the average rate in Canada, and has doubled in the last 15 years, according to Aboriginal Affairs.

Overcrowding is also far worse among the Inuit than among the non-aboriginal population. According to information from the 2006 census, 31 per cent of Inuit homes were considered too crowded, compared with 26 per cent for homes on First Nations reserves, and a three per cent average for Canada as a whole.

516 ♥ Is Norway's farmed salmon as healthy as we think?