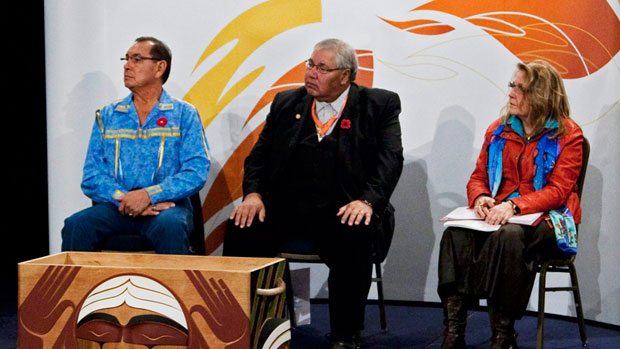 The residential school system constituted an assault on aboriginal children, families and culture, and Canadians have been denied a full and proper education about aboriginal societies, according to a copy of the Truth and Reconciliation Commission’s interim report obtained by CBC News.

The interim report was leaked Thursday to CBC News, a day before the three commissioners — chair Murray Sinclair, Wilton Littlechild and Marie Wilson — release the report in Vancouver.

Their 20 recommendations address education, health and commemoration, among other issues.

They recommend setting up a mental-health wellness facility in Canada’s North in either the Northwest Territories or the eastern Arctic territory of Nunavut, saying such a centre is “critically needed by residential school survivors and their families and communities.”

The federal government and the churches involved in residential schools should establish what the commission calls “an ongoing cultural revival fund” to pay for projects related to the cultural, traditional and spiritual heritage of Aboriginal peoples in Canada.

The interim report comes as the commission reaches the halfway mark in its five-year mandate. The commissioners are set to deliver their full report when their mandate expires in 2014.

Some other recommendations are:

The first residential schools were established in the 1840s and the last one closed in 1996.

Aboriginal children were separated from their families and sent to Christian schools, where many students were abused.

The report says the impacts were immediate and have been ongoing since.

Ron Morrisseau is a survivor who went to St. Joseph’s school in Thunder Bay, Ont. He says students need to know more about what happened, but it should come not from teachers but from survivors because they were there.

“The people, man or woman, who went to the residential school should have the privilege of presenting their own consequences. They should be teaching the children, not the government,” Morrisseau said.