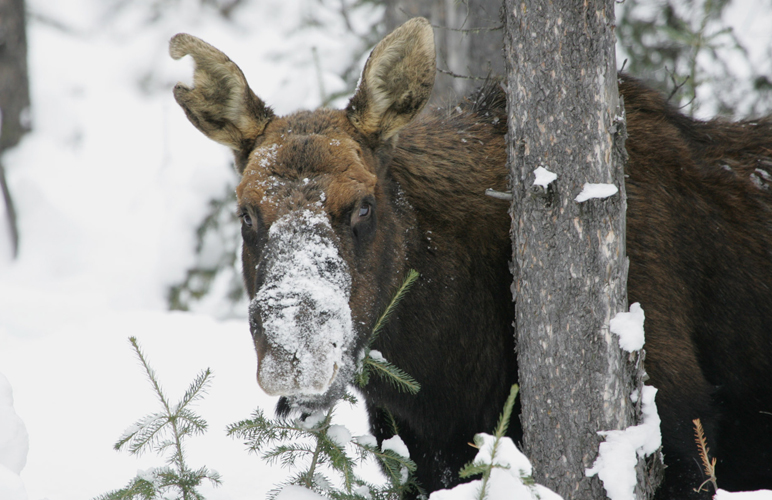 For the first time, the Alaska has signed off on letting a private organization capture and transplant moose that have lingered near Southcentral Alaska roadways this winter, to the peril of hundreds of the big ungulates.

The Alaska Department of Fish and Game on Tuesday issued a permit to the Alaska Moose Federation, authorizing the group to move moose away from roadways in the Anchorage area, Mat-Su and the Trapper Creek area adjacent to Talkeetna through March 31.

After transport, the moose must wind up at least 5 miles from a roadway and in an area with less than 30 inches of snow on the ground.

Fish and Game said it had spent several months planning the move with the federation. “We have been dealing with this problem for years and we are open to new, creative solutions,” said Dale Rabe, deputy director of the department’s Division of Wildlife Conservation.

Near-record snowfall this winter has boosted the number of moose-vehicle collisions along Southcentral roadways to more than 400 in the Mat-Su area alone. Gary Olson, executive director of the Alaska Moose Federation, said one day this winter volunteers with his organization picked up 15 moose killed in vehicle collisions in 20 hours.

“We want to do more than react to collisions,” he said. But critics of the federation question why a private organization is being allowed to do work state biologists would typically perform.

Veteran moose biologist Vic Van Ballenberghe is among the critics.

“There are a number of questions that are unanswered. One of them is where to put the moose. You’d be hard-pressed to find a place where snow depth isn’t a problem.

And moose may not be the only animals facing danger as the program goes forward. Tranquilizing moose by darting them carries potential perils, too.

“My concern is especially in urban areas,” said Van Ballenberghe, who’s been doing moose research for 38 years, including five at Fish and Game and 20 with the U.S. Forest Service. “If you fire a dart with the drug at the moose and miss the moose, somebody can pick it up. A single drop of that on your skin can kill you. It’s a highly toxic narcotic.

“Darting moose requires background and practice to get it right. It’s not unusual to have animals die, either.”

The Moose Federation will employ veterinarians with the U.S. Department of Agriculture (USDA) Animal and Plant Health Inspections Service’s Division of Wildlife Services to tranquilize moose. Under the permit, all moose captured by the Moose Federation will be fitted with radio collars, ear tags, and tested for diseases and parasites.

“It’s possible some may be moved 40 miles or more,” Rabe said. “The goal is small, younger animals. The original concept the Moose Federation came to us with was saving the calves.” Weight is one reason why. Cows weighing more than 700 pounds are difficult to move; calves under 300 pounds are a little easier.

Olson said areas around Glennallen with lots of willow — and less snow — near the pipeline corridor offer good prospects.

Olson told The Associated Press the cost of the relocation program adds up to “a little over a million dollars.”

The Moose Federation has received about $1.2 million in state grants pushed by state Sens. Lesil McGuire, R-Anchorage, and Lyman Hoffman, D-Bethel. Previously, the group received state approval for an effort to lure moose away from roadways with food.

It also has raised money in private contributions.

According to a Fish and Game news release, “marking the moose is important to track their survival. The terms of the permit require (the Moose Federation) to monitor the post-release movements and survival of the moose and to share this data with ADF&G.”

While allowing a private organization to handle state wildlife is precedent setting, Rabe said, “We have the authority or the control to set the parameters by which they engage in the program. If you look at it, you could argue we permit people to take care of wildlife in the zoos, too.

“We are handing off certain activities and responsibilities, but we’re not giving up control. We’re evaluating the site and the animals before capture. They have to report back. Yes, they may be handling the animal out of our sight, but that doesn’t mean there’s not department oversight.”

While relocation of individual moose is not a method that Fish and Game would typically use because of cost-effectiveness, too many moose are being killed on the roadways, Rabe told the Associated Press, and the federation is best-positioned at the moment to do something about it.

“We want to give it a fair shake,” Rabe said. “They have the support of the Legislature, and we want to treat this as an experiment.”

And even though next winter may not see such heavy snowfall, Olson of the Moose Federation said he expects the program to continue.

“It’s going to be multi-year program, no question about it. We’ve been working with Fish and Game since September. We’re going to be acquiring additional equipment and more collars for next winter.

“This is a recurring deal, an every-year tool, not just for deep snow.”