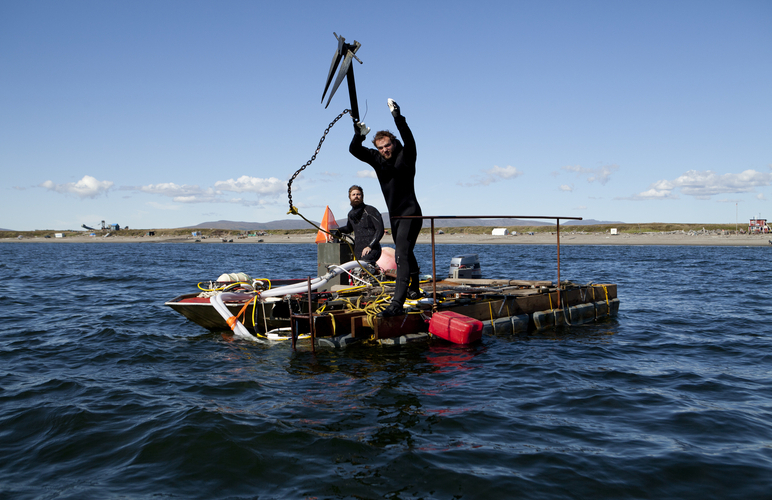 Aging Interior Alaska resident Jim Wilde learned well in the autumn of 2010 the danger of failing to register a boat in the 49th state, and now it’s the turn of the men and women of reality TV show “Bering Sea Gold.”

Wilde became locally famous after he refused to immediately stop his unregistered boat on the Yukon River so National Park Service rangers could perform a safety inspection.

He swore and headed for the beach, which he thought a safer place to chit chat.

It wasn’t. Rangers took down the 71-year-old man, handcuffed him, and hauled him off to jail in Fairbanks.

Who knows what might happen this summer in Nome when the gold dredging season revs up, with both the state and the U.S. Coast Guard poised to do something about all the high-profile unregistered boats there. Such boats have been parading across television screens all over the country as players in the Discovery Channel show that focuses on a handful of people trying to suck gold from the bottom of the ocean just outside of Nome.

The miners call their boats “dredges,” but they’re boats, according to Jeff Johnson, the boating law administrator for the Division of Parks and Outdoor Recreation. Almost any man-made contraption designed to float on the water qualifies as boat in Alaska, and the minute someone attaches a motor, it becomes a motorboat. By law, all motorboats must be registered in Alaska.

That most of the “Bering Sea Gold” flotilla appears unregistered has been noticed. “We got a ton of calls,” said Mike Folkerts, the boating safety officer of the U.S. Coast Guard in Alaska. “So did (Alaska State) Troopers.”

A response is planned.

“We’re going up there,” Folkerts said. “We’ve already got plans in the works. It’s a disaster waiting to happen. They’re building junk.”

Folkerts noted some of the “dredges” look ticky-tacky enough that legitimate questions could be raised as to whether they’re safe to be on the water. But, that said, “they’re purpose built. We’re probably going to let them go out there” if they’re not in danger of immediately sinking.

The dredges won’t, however, be allowed to continue without meeting minimum registration and safety requirements — visible numbers, personal flotation devices for everyone on board, visual distress signals of some sort, some kind of sound-making device, and a fire extinguisher on the boats with any sort of enclosed compartment.

“We’re going to do some enforcement,” Folkerts said. “We are going to see that this gets done. Unfortunately, we don’t have bodies up there regularly.” They’ll have to be flown in.

As Folkerts noted, the U.S. Coast Guard has little presence in U.S. Arctic and near-Arctic waters except for occasional fisheries patrols. West of Kodiak, there are no Coast Guard small-boat stations. In many areas, the federal officials rely on state enforcement.

“We work with the troopers all the time,” Folkerts said. “Boat registration is a huge issue across the state.”

Registrations fall off dramatically in places that lack enforcement, such as the Yukon-Kuskokwim Delta and near-shore Bering Sea waters. “The troopers are spread so incredibly thin,” Folkerts said.

They often must deal with crimes more significant than boat registrations, too. Still, it can be hard for those in authority to overlook the law when they see regulations flaunted on national television. “Bering Sea Gold” is almost an advertisement for the need for enforcement.

Everyone involved with boating safety in Alaska would like to see the dredge owners take the lead in seeing that their boats and their crews comply with applicable laws.

“I’d like to see them police themselves,” Folkerts said. “Everyone hates to have too much regulation, I know.”

An education effort is already under way to alert dredge owners to the laws. Folkerts and Johnson think this might take care of many of the violations, but some people won’t get the message.

“I call it the 40-40-20 Rule,” Folkerts said. “Forty percent will do the right thing (because it’s the law.) Forty percent will respond to enforcement. And then there’s that 20 percent. You can’t do a lot with them.”

Having watched “Bering Sea Gold” — “I watch all that crap,” Folkerts confessed — he can see where there might be some in the 20 percent group dredging in Nome. “They’re the frontier cowboys,” he said. And cowboys, as everyone knows, don’t like to be fenced in by pesky regulations — federal, state or local. Folkerts is optimistic this attitude is changing in Alaska.

“Obviously in Nome, they’d probably be a little higher (rate) than in Juneau, where we have a presence,” he said. “But folks are a lot better than they used to be.”

There appear to have been personal floatation devices on at least some of the Nome dredges, as required by law, Folkerts said. And some of the craft are more seaworthy than they appear. Then again, he noted, nobody is sure who or what will show up off the beaches of Nome this summer, lured north by the promise of gold from watching “Bering Sea Gold.”

“I heard up to 100 dredges are coming this year,” Folkerts said. He doesn’t expect many — if any — of the owners to get rich.

“It’s just like all the gold rushes in the history of the planet,” he said. Most of the miners make little. The money is in the business. In this case, the business is “Bering Sea Gold.”

Hopefully, no one will get killed trying to make a buck by sucking gold out of the sea.