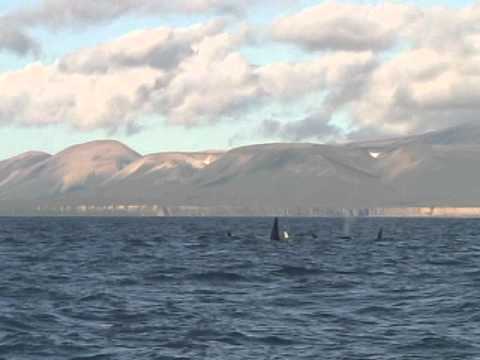 The white killer whale, dubbed “Iceberg” by scientists, spotted in the waters off of Russia in 2010, may be the first adult, fully-albino killer whale ever documented. But in order to reach full maturity — which for orcas arrives in their mid-teens — it must have been swimming around out there somewhere, right?

Some signs suggest that it may have been hanging around Alaska’s Aleutian Islands in 2000 and 2008.

According to the Seattle Times, a white killer whale was seen near Adak Island in the eastern Aleutians twice in the first decade of the millennium. One of those sightings featured a unique whale identifiable by a shark bite near its blowhole and unique ridging — a “rake scar” — on its dorsal fin, according to a brief paper on the sighting by scientists Martin Renner and Kevin Bell.

Those scientists made the 2000 sighting. Renner and Bell speculated that it may have been the same whale spotted farther north in 1997, near St. Lawrence Island in the Bering Sea. No photos existed from that sighting.

The scientists who spotted Iceberg in 2010 in Russian waters observed that it traveled in a “resident” pod with about a dozen other orcas. A resident pod doesn’t mean the whales stay in one geographic location. Instead, it implies that whales in the pod remain relatively stable over time. Resident pods tend to eat fish while the constantly-changing transient pods dine primarily on marine mammals such as seals.

Renner and Bell also mention that due to the shark bite on the back of the whale they spotted, the orca had likely traveled far in the Pacific Ocean. The bite presumably came from a cookie cutter shark — a common predator of large marine animals. Such sharks typically live in warmer waters.

Indeed, orcas have a tendency to travel far and wide. Between 2010 and 2011, scientists tagged three resident killer whales and tracked their movements in southern Alaska waters. One stayed close to Southeast Alaska, but the others traveled as far as the Katmai region of the Alaska Peninsula. One of them made the trip in little more than a month.

The scientists behind the 2010 sighting were unable to determine if Iceberg was a fully-albino orca, but the whale spotted near the Aleutians had some coloration in the areas that would typically be black on a killer whale, according to Renner and Bell.

“While the whale appeared pure white from a distance, the characteristic black markings were visible as a tan shadow on close approach,” they wrote.

The 2008 sighting came during a National Oceanic and Atmospheric Administration expedition in Alaska waters. NOAA scientist Holly Fearnbach snapped photos of the whale then, speculating that its coloring may be the result of a genetic disease called Chediak Higashi Syndrome that is often fatal to young orcas. A fully albino whale afflicted with Chediak Higashi Syndrome would have a pink eye, which neither Fearnbach nor the scientists who made the more recent sighting observed.

Which is what makes “Iceberg” such a unique discovery, if indeed it turns out to be a true albino whale and not the one spotted by Renner and Bell in 2000. The scientists who observed Iceberg in 2010 estimated his age at about 16 years, based on the dorsal fin. Renner and Bell estimated the age of the whale they spotted at about 20 years old — a decade before Iceberg was documented near Russia.