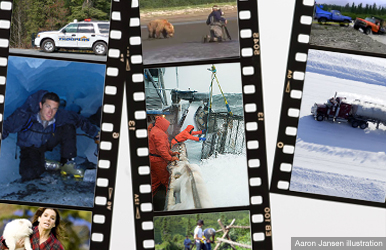 The Alaska film community breathed a collective sigh of relief in the early-morning hours of April 16 as the Alaska Legislature lurched toward adjournment.

By then, Senate Bill 23, which would extend film tax credits in Alaska for 10 years, had passed the State House and Senate.

But suddenly attached to the bill were three unrelated credits — plus one troubling clause that caused some backers to worry about potential censorship at the hands of state legislators.

For the film industry, though, those nervous moments are all but forgotten, as numerous companies have emerged to fill the demand for catering, casting, location and technical services, secure that their investments may yet pay off in a big way.

With $200 million worth of tax credits (or 10 years of credits, whichever comes first), production companies can continue to consider Alaska among favored shooting locations, meaning jobs will continue to be created by productions coming north.

Now an industry under construction says it can look toward training new employees skilled in television and film production services. Potential new infrastructure could crop up, too, as studios look for soundstages and film campuses where they can use Alaska as more than a pretty backdrop, getting into the nitty-gritty of film production here.

So how did it get to this point? Actually, it almost didn’t.

Winding road to the governor’s desk

Film is a sexy industry, far from the grimy politics of Alaska’s favorite moneymaker, oil and gas. So why, in the waning hours of the Alaska Legislature, did SB 23 become the political equivalent of a final, last-ditch football play? Blame it on oil and gas.

Meanwhile, those who had cast their lot with Alaska film watched anxiously.

Bob Crockett, general manager of Piksik — a production support company that’s a subsidiary of NANA Development Corp. — and president of the Alaska Film Group, said that there was concern as the session wound down with no move to act on the bill.

Carolyn K. Robinson, a founder of Sprocketheads — another production company popular with studios making films in the Last Frontier — said she was watching the session anxiously as SB 23 was taken up at the last moment in the House.

Ellis, however, didn’t feel much nervousness, having been through numerous legislative sessions.

“I’ve learned to see several chess or checker moves ahead, so I was able to remain pretty calm,” he said.

He still had to sit and watch as the bill was passed around from legislator to legislator, with various other tax credits tacked onto it — gas storage tax credits, oil and gas exploration credits, a small-business tax credit.

The result was a mini-omnibus bill that allowed several bits of unfinished business to pass in the final hour of the session. In the process, the name of the bill changed (then changed back), passed the House once before being returned to the House for another change. The session nearly adjourned without any action on it.

Crockett theorized that none of the issues in the mini-omnibus bill were important enough to pass individually in the closing hours of the session, so they were tacked onto the film bill, which had broad support but could have been vulnerable as lawmakers pursued their own projects.

In the end, Ellis was pleased. “It became a terrific package of economic incentives,” he said. “I had no problem with SB 23 being used for economically beneficial activities. I was mainly excited about passing a major economic development bill that I thought the governor would sign.”

It still sits on the Gov. Sean Parnell’s desk.

What’s in the bill?

The bill provides 10 years of transferable tax credits worth $200 million, whichever comes first. Alaska’s biggest production to date, the Drew Barrymore vehicle “Big Miracle,” earned a credit of about $10 million. If Alaska continues to be a magnet for large-scale productions, that $200 million could run out, meaning the industry would have to lobby for more funds from the Legislature.

“I think that it’d be a concern that we’d be happy to see,” AFG president Bob Crockett said.

Other features of the bill supported by industry include the increase of the potential maximum tax credit from 44 percent to 58 percent of total production costs. There’s also an increased incentive to hire Alaskans for many roles, from support roles to extras in the film and beyond.

“It was already incentivized to hire more Alaskans, but this kicked it up another notch,” said Robin Kornfield, president of Piksik. “Anything that could conceivably come from Alaska, I think they will try to make happen with this incentive.”

That addresses one of the most publicized concerns with the bill — that it places too much emphasis on providing tax credits for Outside actors, including the higher salaries of stars like Nicolas Cage and John Cusack. The new version of the bill caps that credit at 5 percent of those costs.

According to Robinson of Sprocketheads, that may hurt Alaska’s potential to lure some productions featuring big-name actors.

“Basically, everything is built around the actors,” Robinson said. “They’re what makes a movie for the most part, nowadays. So when you put a cap on arguably the most important, highly visible aspect of the whole film, that can hurt you.”

Ellis agreed. “Above-the-line caps are problematic to the industry, and they shop around for places without above the line caps,” he said.

Both Kornfield and Robinson expressed confidence that although it may take extra explanation to producers interested in Alaska as a shooting locale, the new restrictions wouldn’t squeeze out every production eyeing the 49th state.

The most worrisome issue, however, from the perspective of film companies and, perhaps, the public, pertains to what could be interpreted as censorship.

Included in the passed bill is a clause that the Alaska Film Incentive Review Commission — made up of the commissioners of the Departments of Natural Resources, Labor and Workforce Development, Commerce and Economic Development and Revenue — review each proposed movie and determine its potential impact on the economy of the state.

That includes, according to the language in the bill, looking at “the public perception of state policy on the utilization and development of the natural resources of the state,” giving the commission a way to deny tax credits based on concerns over the way the film portrays Alaska and its resources.

Sen. Ellis said that although his original bill included a review process, it didn’t go to the extreme of review by commissioners. An example given by Ellis about how the process might work is if Greenpeace were interested in producing a tax-credit-eligible documentary that “advocated for the outlawing Alaska Native subsistence whaling,” it may be denied a tax credit.

But it could go the other way as well. “Big Miracle” featured a strong environmental message. If it were made under the new bill, could it be denied a credit? What if someone wanted to film a documentary on the Exxon Valdez oil spill? Would that be determined to be negative to “the public perception of state policy” on resource development? Some worry that this could lead to a form of censorship, based on the political leanings of the commissioners.

Ellis is quick to say that’s not censorship, because filmmakers interested in those projects could still make those films. They would just have to do so without a subsidy from Alaska.

“It’s a free country, and people can believe and say anything they want to,” Ellis said. “People can come here and make whatever movie they want. There is no government censorship, but if you want the state of Alaska to invest in something that hurts the state of Alaska, that’s where the review comes in.”

Complicating matters further, it’s not entirely clear how such a decision by the commission would be appealed if a company disagrees.

Most industry folks are concerned about the clause, but seem content to see what will happen.

Robinson said that she’s concerned less with the politics of the issue than the time such reviews may take. Production companies work on a tight timeline, and if the review process takes too long, a movie might take its business to another location.

The Tax Foundation, following passage of the bill, issued a lengthy look at the state’s film tax incentive program. It concluded that although film tax credits can help diversify an economy — a valuable asset in a state as dependent on fossil fuels as Alaska — the industry ultimately proves unsustainable without tax credits. They also note the content restrictions and concerns about censorship.

Between 2010 and 2012, the revenue injected into Alaska’s economy by the tax credit program slightly outweighed the tax credits issued by about $6 million.

For now though, with the incentive program secure, the industry can look to the future for the first time in years.

Several productions continue to evaluate the Last Frontier as a potential contender for shooting locations. A movie with the working title of “Hunter Killer” could be the largest production in the state to date, budgeted at up to $100 million, if it commits to Alaska.

Also up in the air is the construction of a soundstage facility that could become increasingly essential to the burgeoning Alaska industry. In order to appease productions’ appetites for Alaska workers to earn tax credits, Piksik will offer seminars for all aspects of the production process, from behind-the-screen work to acting classes.

Piksik is also moving forward with work on its “smart soundstage” facility in south Anchorage, under construction in cooperation with Evergreen Films. When finished, it will offer a greenscreen that Alaska productions can use for shots heavy on special effects.

Additionally, Piksik hopes to move to the studio in the coming months.