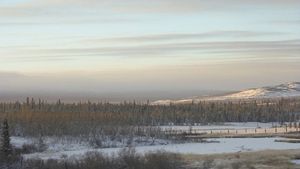 The Champagne and Aishihik First Nations wants the government in Canada’s northwestern Yukon territory to move soon to develop a land use plan for their traditional territories in southwest Yukon.

They say too much development is already happening without proper input from their members.

Joe said in return, they were supposed to have a say in land development. Joe said it’s time to exercise that right.

“The government we have in power right now – their policy platform is to make land available for all Yukoners, and we have seen land developments up and down the highway, strip developments, power lines, access roads, and it is changing the face of our territory,” he said.

However, some critics in the territory said the Peel River planning process has shown the government can’t be trusted. The territory rejected the first recommended plan for the area that suggested 80 per cent be protected.

The plan was reworked with a recommendation that a further 25 per cent of the land be opened in the future. The government is still not accepting the recommendation.

“We are trying to develop a relationship so that any kind of issues that come up like this we can deal with them,” he said.

Allen said it’s better to have a land use plan which both governments can live with than no plan at all.