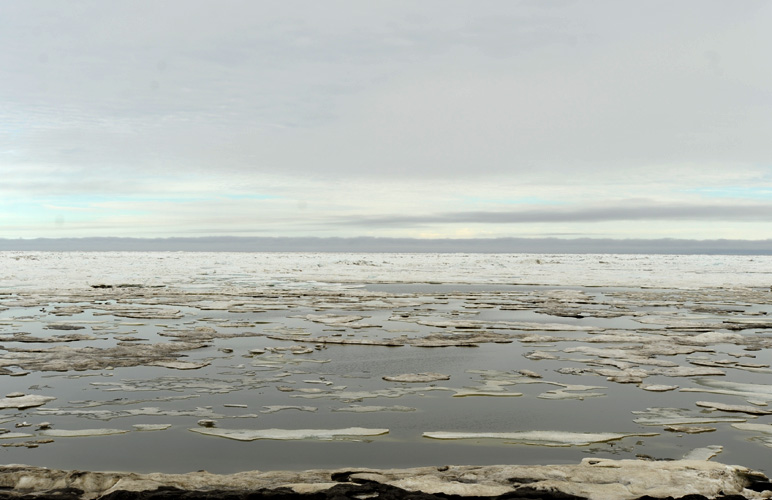 A new study shows that freshwater discharge by northern rivers into the Arctic Ocean is up, and the reasons might be surprising.

The study, published in the Nature Climate Change journal and authored by seven scientists including Xiangdong Zhang of the University of Alaska Fairbanks International Arctic Research Center, found that three rivers in Eurasia — the Ob, Lena and Yenissey — are all contributing 10 percent more water than they did 60 years ago.

That’s about 1,700 cubic kilometers a year, or about one Lake Ontario of freshwater discharged into the Arctic Ocean every year.

More fresh water into the Arctic could mean a change of water currents. Fresh water floats on top of salt water and the mixing, or stratification, affects the ocean’s density. If the rate of mixing changes, the ocean could see changes, like increasing sea ice or additional climate change in regions surrounding the Atlantic Ocean.

But at the heart of the study is why more water is entering the ocean. Zhang, speaking by phone in Fairbanks, said there are many studies out seeking the source of increasing freshwater. Some look at permafrost melting, others at water levels in the soil. The study, titled “Enhanced poleward moisture transport and ampliﬁed northern high-latitude wetting trend,” looked at increasing “atmospheric circulation,” or weather patterns.

The scientists found that more warm air masses were finding their way to northern Eurasia due to climate change. That trend and its “atmospheric moisture transport” correlates with an increase in the amount of water entering the Arctic Ocean via the rivers.

Before the study, all other methods of measuring moisture going into rivers had been imperfect, Zhang said. Water released from plants through a process called transpiration, for instance, was based on estimates and other precipitation measurements are sparse in the region. By taking figures based on climatological data points like wind and humidity, scientists were able to come up with a more accurate system for tracking the moisture released into the rivers.

“This provided a new approach to look at water over the Arctic,” he said.

While Zhang said more studies will be needed to determine what the exact effects will be, they could be significant – though not as extreme as depicted in the Hollywood blockbuster film, “The Day After Tomorrow.” But Zhang used the film as an example. In the 2004 movie, melting polar ice changes the North Atlantic currents, greatly influencing regional climate. While Zhang emphasized the movie is fictitious, it shows how fresh water could change ocean currents and possibly affect regions that currently have somewhat mild climates.

Also in question is how an increase in sea ice driven by additional freshwater could affect Arctic communities dependent on the ice for their survival. This study doesn’t answer that question, but Zhang hopes it will give others insight.