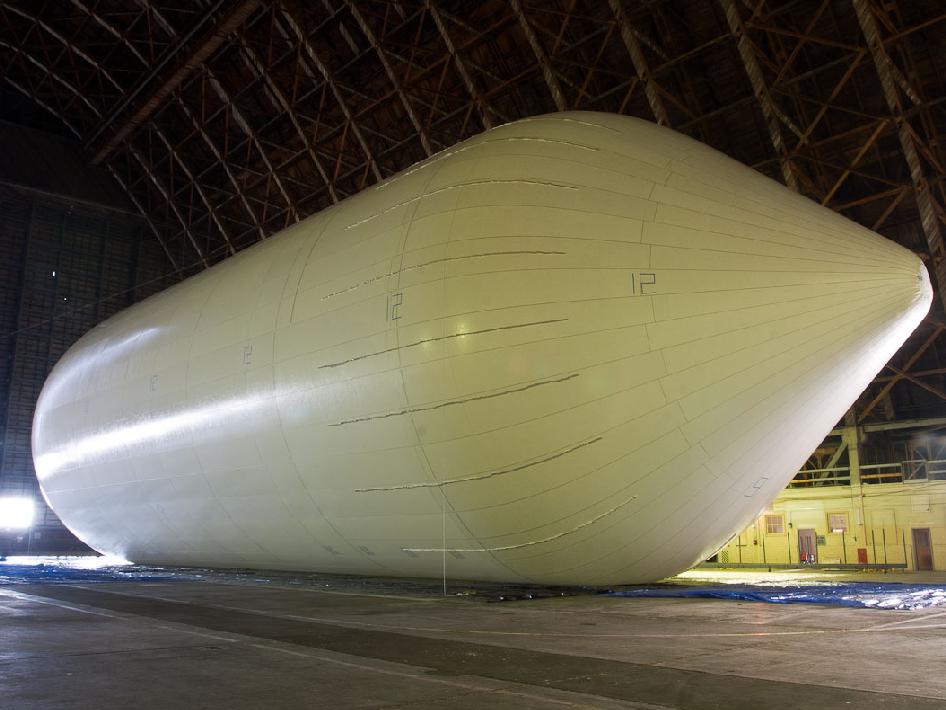 Airships floating over the Arctic: It sounds more like science fiction than hard science. But a group of researchers, policymakers, developers and financiers are meeting this week in Anchorage to discuss a more realistic version of that vision.

And many seem to think realizing the vision is not only possible, but probable — provided the funding comes through.

For most people, airships conjure visions of blimps and zeppelins, of the iconic Hindenburg crash way back in 1937, “Oh, the humanity!” echoing inside the head.

A serious 21st century discussion about airships seems anachronistic, since the only blimps most people see these days hover over sports stadiums, pitching tires, of all things.

But spend a couple of hours among these dirigible die-hards and airships begin to seem practical for Alaska and the Arctic:

•They’re capable of traveling for days, even weeks at a time.
•Airships can land in the most remote locations.
•Really big airships might transport cargo loads that weigh thousands of tons.
•Expensive runways might become a relic of history for Bush Alaska communities with blimps capable of vertical takeoffs and landings.

Heavy-lifting cargo airships, such as those imagined this week at the Cargo Airships for Northern Operations Workshop, weren’t conceived by helium salesmen. The U.S. Department of Defense, interested in their transport potential, enlisted airship development help from NASA a few years ago, according to Dr. Pete Worden, director of NASA’s Ames Research Center in California.

“We see this as potentially a major new industry for America,” Worden told attendees at the University of Alaska Anchorage on Thursday, day two of the airship conference. Airships don’t just have numerous practical applications, Worden said. They also are environmentally friendly, a “green aviation” alternative to today’s fossil fuel-reliant air travel options.

Worden said that although some people might view airships as antiques of another era, other modes of transportation that today seem outdated actually offer more sustainable ways to get around. Consider ships, “an ancient mode of transport,” that’s getting another look, he said, pointing to renewed interest in cargo ships equipped with sails. Wind power, unlike fuel engines, costs nothing and weighs nothing, after all.

“I think the interesting part is things that might have been old ideas become very intriguing with new technology,” he said.

Given the state’s vastness, its far-flung communities and lack of roads, “of all the places in America, we see Alaska as a likely early adopter” of cargo airships, Worden said.

So the sky’s the limit for airships in Arctic Alaska? Blimps floating over the 49th state conjures fanciful images of Barrow, Alaska’s northernmost community, brimming with steampunks ready to set sail over yonder Arctic horizon. Salty old sky captains gnawing stogies and barking orders while a fleet of airships hovers overhead, rope as thick as a man’s fist dangling down toward the tundra like tentacles of an octopus.

What a fantasy! Like a cloud it dissipated as panelists discussed the gritty details of realizing an Alaska airship fleet: expert presentations on cargo airship production and talk about potential investment opportunities. Practical concerns like how an airship would handle Alaska’s extreme and unpredictable weather. Economic problems involving customer base and infrastructure needs for supporting an airship transportation system dominated Thursday’s agenda.

Frequently mentioned as possible customers were large-scale mine projects, several of which were as hypothetical as the airships themselves. They included the proposed Pebble Mine prospect and the Donlin gold mine. Ideally, airships would replace cargo transport to Bush Alaska that’s currently dependent on barges and planes.

Jeff Otteson, director of the division of program development with the Alaska Department of Transportation, suggested several other possible customers for airship operations in Alaska. The U.S. Postal Service might be interested in airships as a way of driving down the cost of bypass mail, a controversial program that subsidizes mail service in rural areas of Alaska. Or maybe, he noted in a panel discussion, the Coast Guard would be interested in airships for monitoring and regulating Arctic shipping activity.

“Show them that this is a better tool in the toolbox, and they’ll be all over it,” Otteson said.

Airship as alternative to existing infrastructure also was a popular topic. Craig Campbell, president and CEO of Alaska Aerospace, said that reducing the expense of living in and traveling to rural locations in Alaska would be key to success for airships here.

“It’s expensive, it’s hard to get around, the road system isn’t extensive,” in Alaska, Campbell said. “So the solution is low-cost transportation off the road system. And that’s what you could have here.”

But where would the money come from? Enter AIDEA. James Hemsath, a deputy director at the Alaska Industrial Development and Export Agency, also presented to the conference on Thursday. AIDEA provides bonds and occasional ownership of Alaska infrastructure projects. He touted AIDEA’s role in constructing the huge FedEx hangar at Ted Stevens Anchorage International Airport as an example of what AIDEA might bring to the table for airship development.

Unfortunately, AIDEA wouldn’t be able to help with the actual construction of an airship, Hemsath said in response to a question from the audience.

“An airship doesn’t fit the model,” Hemsath said, saying that AIDEA’s role, if any, would more likely be in infrastructure development like hangar construction, or development of helium, or assembly facilities. “We have to have a source of revenue to issue that bond.”

The mood at the conference was optimistic yet short on specific, substantive commitment required for such a heady project.

But when you’re trying to get an idea off the ground, you have to start somewhere.