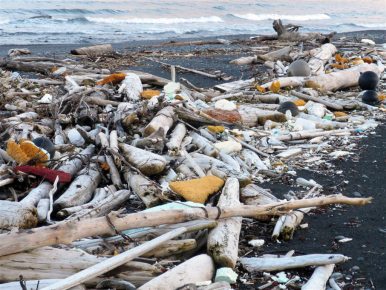 From a distance, Styrofoam almost looks like snow. Little white specks bunch up between driftwood and beach-blasted rocks.

The specks are castoffs — smaller chunks from larger foam buoys and insulation that has washed up on hundreds of miles of Gulf of Alaska beaches since the mammoth Japanese tsunami in 2011.

Some of the debris is tiny, resembling tiny bits of popcorn. Some is fist-sized or bigger, scattered over remote Alaska beaches. Even broken down into bits, debris can often be seen from the air.

And with winter approaching, environmentalists worry the mess may become a tsunami of trash by the time the spring thaw visits Alaska’s 33,000 miles of coastline.

“It’s all going to get torn to hell,” said Chris Pallister president of Gulf of Alaska Keeper.

Those specks of Styrofoam won’t just leave a mess behind. If those bits — plus other pieces of plastic, debris and other chemicals — return to the ocean, it could wreak havoc on marine life.

All told, some 1.5 million tons of debris were swept into the sea when a magnitude 9.0 megathrust earthquake struck the ocean floor 45 miles east of the Tohoku region in northern Japan on March 11, 2011. As the tsunami swept inland with 130-foot waves, cities and towns were leveled and thousands of people perished. Every thing that might float away, the detritus of modern civilization, was flushed into the ocean as the waves receded.

This year, some of it completed a trans-Pacific journey on an Alaska shoreline. Pallister said his group has collected 400 cubic yards of debris this year, enough to fill 10 large dump trucks. During the cold and dark of an approaching Alaska winter, clean up efforts may all but stop. Seas pick up. Weather along much of Alaska’s coast becomes even more treacherous. Any debris reaching the beach may stay there for a while, battered even more by surging seas.

“If what’s on the beach overwinters, its going to spread through 100 miles of coastline,” said Patrick Chandler, special coordinator for the Center for Alaskan Coastal Studies. “It going to be very difficult to try to clean up that Styrofoam.”

Pallister has been monitoring tsunami debris across Alaska for months. He’s seen up to seven times the usual amount of debris on some beaches – a difference he terms “staggering.”

“There are billions of little pieces everywhere. We can’t pick ’em all up,” Pallister said. “Just bags and bags full. We’d have to have vacuum them all up.”

If all that plastic gets washed back into the sea, unsuspecting animals may end up consuming some. John Kennish, a professor in the University of Alaska Anchorage chemistry department, said even small organisms like krill can accidentally gobble up debris.

While a krill full of plastic may not be dramatic, small amounts of debris can add up as they move through the food chain.

“If you impact enough of these organisms, what are the implications?” Kennish said. “Are you killing off organisms that are food for fish? Will that affect us? These systems are so integrated, it could have an impact on human beings.”

Earlier this month, volunteers picked up 4,000 pounds of debris from two miles of beach at Gore Point, located on the southern tip of the Kenai Peninsula facing the Gulf of Alaska. Shoes and walkers were among the trash, but most of it was Styrofoam.

The National Oceanic and Atmospheric Agency is monitoring debris and facilitating tsunami clean-up in the United States. Keeley Belva of the National Ocean Service said NOAA currently uses a “hind-cast,” looking back at previous weather and ocean-current data, to estimate where the debris is headed – and when it will arrive.

“We don’t know exactly where (the debris) is,” she said. “It depends on currents, winds and storms. It’s hard to project.”

The National Ocean Service is working with a bevy of local, state and volunteer groups on clean up. And while ocean debris is nothing new, according to Belva, tsunami debris greatly amplifies the problem. “Being able to dispose of things properly is always important,” Belva said.

So far NOAA has contributed $250,000 in grants on cleaning up tsunami debris — or $50,000 for each of the five U.S. states with a Pacific Ocean coastline.

Volunteer organizations call that amount woefully inadequate, and Alaska Sen. Mark Begich has joined the effort to get more. Begich has suggested $45 million be allocated over two years to cope with the “slow moving disaster.”

“The small amounts of these grants only serve to underline the inadequate attention and funding the administration is giving to this crisis,” Begich said.

Chandler noted the tsunami cleanup doesn’t have the “glitz and glam” of a disaster like an oil spill. Billons of dollars flowed to clean up such disasters as Exxon Valdez or the Deepwater Horizon blowout in the Gulf of Mexico.

And the tsunami debris isn’t hitting just big beaches like those of Montague and Kayak islands, which shield Prince William Sound from the Gulf of Alaska. For every sizeable beach, there are 10 or 20 smaller ones.

“I don’t want to make it sound like people aren’t aware and don’t care,” Chandler said. “But for this event, there was no money planned. If you had disaster, like an oil spill, there would be major resources out there immediately.”

Bad weather all around

Tim Veenstra has been monitoring the project for Alaska through a contract with the state Department of Environmental Conservation. His company, Airborne Technologies Inc., based in Wasilla, Alaska, has been flying Alaska shorelines taking high-resolution photos. Just doing a monitoring project has been a challenge and he’s been working on it since July. Weather along Alaska coastlines can change rapidly.

With only a few spots left to monitor, Veenstra said debris seems to be everywhere, except Cook Inlet.

“There has been no place we have flown that we have not found suspected debris from the tsunami,” he said. He hasn’t flown over Bristol Bay yet, so that’s next.

“It’s not suspected out there, but I want to make sure,” he said.

How all the debris, and the Styrofoam, will be handled is still being figured out.

Gulf Keepers of Alaska volunteers will work as late into autumn as possible to collect the debris. They have one more 10-day trip planned, hopefully to Knight and Eleanor islands in Prince William Sound. Pallister said they’ll try to make it this winter, but everything depends on how nasty the weather gets.

“Personally, I think it’s the worst spill that’s ever hit this state,” Pallister said. “Look at the scope of it … I just don’t know how we’ll ever clean it all up.”