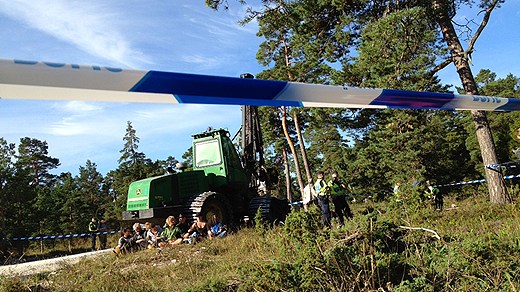 Environmental activists have been celebrating a victory on Gotland Island, off the coast of southeast Sweden, as tree felling machinery remained idle on Saturday evening.

“It was a smart and brave decision,” field biologist Alva Snis Sigtryggsson told Swedish news agency TT. “It feels like a partial victory.”

Earlier in the day police had to use cutting equipment to remove Greenpeace protestors who had chained themselves to the machinery. The tree clearance was planned to make way for a controversial limestone quarry in the Ojnare forest adjacent to an EU designated Natura 2000 protected area.

The forestry owners’ association, Mellanskog, issued a statement indicating that the forest clearance will be stopped until after a High Court Ruling on the issue.

“We are well aware that Nordkalk has a legal right to start work here but we want to avoid long term splits and bitterness in this community where we have many members,” the association wrote.

The mining company’s communication chief, Eva Feldt, called the decision “deplorable” and blamed the country governor for putting pressure on the forestry group.

Environmental groups, including the Swedish Society for Nature Conservation and Greenpeace have pledged to block all attempts to open a quarry in the area which they say should be protected in line with European Union rules on biodiversity.

461 ♥ Inuit gov. in Atlantic Canada calls for people to stop travel to and from their region

389 ♥ Is Norway's farmed salmon as healthy as we think?

343 ♥ Mass grey whale strandings may be linked to solar storms