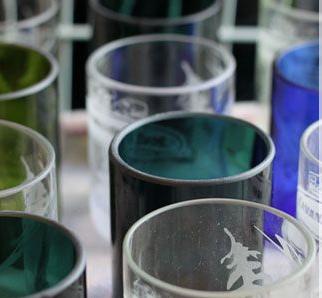 It’s this vision that guided Grogono, a former mechanic and now a self-described ‘vessel maker,’ as he established Old Town Glassworks in Yellowknife, the capital of Canada’s Northwest Territories, in 1994.

Now, eight years later, the Old Town Glassworks’ gallery is lined with everything from vases to drinking glasses made out of recycled bottles and decorated with northern motifs. But if customers want to try their hand at making one, they can attend one of weekly workshops offered by Grogono and his staff.

The preparation is intense. Grogono or one of his staff bring back crates of bottles from the local Yellowknife bottle depot every week. Clients take their pick of the colour and style they want to work with. For the next two hours, one of the Glassworks staff takes clients through a series of stations where they can cut, polish, stencil, sandblast and engrave their objects. The stations were built by Grogono himself with a cacophony of recycled items such as an old washing machine.
Grogono hopes the experience of working with recycled bottles will inspire people to look at other castaway objects in their lives in new ways.

Eye on the Arctic’s Eilís Quinn travelled to Yellowknife earlier this year to hear more about Grogono’s work and why he thinks environmentally minded businesses are so important in the North.

Where did your idea for recycling bottles come from?

It began many years ago with my interest in the municipality of Yellowknife waste management program. At one point, the then-mayor said that ‘we don’t do recycling because we’re a mining town.’ The city had a very linear, mining community mentality: ‘Make it, break it, throw it away and buy another one’. For example, at the time city council was using Styrofoam cups. I went home and thought about it. And I decided to give 12 glasses to the city councillors for Christmas. The glasses still sit in the council.

How did you come to open Old Town Glassworks?

I was experimenting and green funding was available. I wrote a proposal. The equipment that I needed didn’t exist in the North so I went to the dump. I rounded up some stuff that I was then able to modify to the equipment that we’re now using.

What is it about this idea that’s made Old Town Glassworks resonate so much with the community?

I’m a little perplexed myself. I think the workshops are a big part of it. People are just so enthused when they leave. Whether they’re a nurse or a school teacher, people like the hands on experience and the feeling that they get when they leave with something they made themselves.

Where do you want to take the business from here?

There’s no reason that these glass etchings and activities couldn’t be done with pedal power or solar power. I’d like to see developing that. I’d also like to get this to lead to melting of glass and working with liquid glass. But that’s another whole scale because of fuel costs, equipment costs and space costs.

What lessons do you think people can take away from the success of businesses like Old Town Glassworks?

We’ve all heard of ‘reduce, reuse, recycle’. But I’ve modified it a bit to ‘rethink, reduce, reuse, recycle.’ It’s an ongoing pendulum… it’s important to do that rethinking before you start doing. Here in Yellowknife we’re supposedly doing recycling, but we haven’t done the rethinking to say ‘is that really benefitting the planet.’ What’s the cradle-to-grave cost of an activity? Is it advantageous to the society, to the community or is this just a facade for making money? For me it’s very important that our business isn’t just a facade for making money. It’s got an educational component to help people shift out of their old linear way of thinking into a broader and more holistic perspective.

Is there anything quintessentially North about your business?

I think there’s an idea of being frugal with the resources that we have available to us and trying to circumvent that squandering of resources. If we in Canada don’t’ show leadership in how to modify our behaviour and our waste management, then it looks like the rest of the planet will keep wanting to emulate what we do. But if everyone in China starts emulating what we’re doing the planet is not going to last very long. We have to challenge the status quo. Ask ourselves ‘Is that sustainable?’, and if not ‘how are we going to change it?’ Here in Yellowknife we’ve got one of the most affluent societies on the planet. If we can’t figure out how to do it more efficiently and effectively how is anyone else?