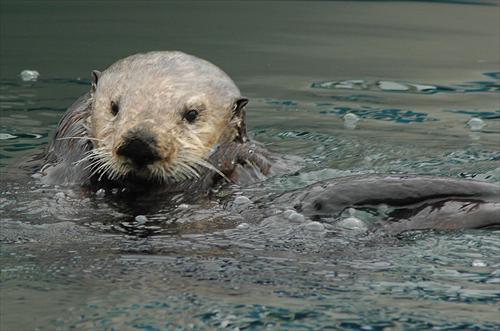 A new study conducted by California, Washington and Alaska researchers finds that the Alaska sea otter — perhaps best known for its soft fur and ridiculous cuteness — may have surprising implications for global climate change.

In the process, the study suggests that predation of plant-eating wildlife may be another key in the combat against rising carbon dioxide levels in Earth’s atmosphere.

The research examined sea otters’ impact on kelp forests from Southeast Alaska to the Aleutian Islands chain far to the west over the past 40 years. Researchers found that in areas where sea otters flourished, the density of kelp — and thus, the amount of atmospheric carbon dioxide that the kelp could absorb — was much higher than areas without otters.

Basic biology would suggest that plants often perform better in an ecosystem with fewer herbivores when mitigated by predation. But the recent study provides some solid numbers on exactly how much impact sea otters can have on kelp growth and, consequently, carbon emissions.

The study acknowledges that sea otters are just one predator, and kelp just one type of aquatic plant life. But the implications of the study could expand to other populations. The researchers also noted that the impact of sea otters on global carbon levels is “not surprisingly, very small, as is the case for almost all other particular species and ecosystems.”

That doesn’t mean the numbers aren’t significant, though. The research estimates that the saved carbon emissions could be worth between about $200 million and $800 million on the European Carbon Exchange, a commodities market where businesses can purchase credits allowing them to produce a certain volume of emissions.

The researchers suggest the revenue could be used to compensate losses to shellfisheries, which often compete with sea otters due to the mammals’ fondness for shellfish. A National Parks Service study examined similar sea otter populations and the effect on seafood ecosystems.