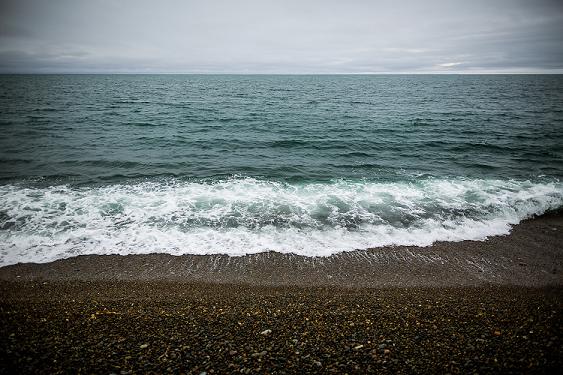 Alaska U.S. Senator Lisa Murkowski has been for years trying to muster up the Republican side of the 67 senate votes required for ratification of the Law of the Sea Treaty. The treaty deals with international waterways, marine boundaries, and access to sub-sea resources in the Arctic Ocean.

Democrats are by and large supportive. The problem since the 1980s has been with the GOP. Most recently, Republican senators, emboldened by tea party favorite Sen. Jim DeMint, blocked ratification of the treaty in July, citing sovereignty concerns.

And in August, tea party factions in the party managed to insert the following language about the treaty in the national platform:

Because of our concern for American sovereignty, domestic management of our fisheries, and our countries long-term energy needs, we have deep reservations about the regulatory, legal, and tax regimes inherent in the Law of the Sea Treaty and congratulate Senate Republicans for blocking its ratification.

Not many people read party platforms, but the inclusion of the treaty does send a message to fellow Republicans and does somewhat undermine Murkowski’s efforts.

What might help move the treaty along, however, is Alaska’s involvement, said Jeff Pike, a long-time D.C. lobbyist who is working for the Pew Charitable Trusts on the treaty.

“Alaska has two senators and two votes like every other state,” he said. But because Alaska has a “compelling story to tell,” about the importance of the treaty, it would help if all state officials — the governor, the lieutenant governor, and commissioners — were involved in pushing for it, Pike said. “Telling Alaska’s story could help convince others that ratification is the right thing to do for Alaska,” he said.

Alaska’s governor, who might have a voice in the tea party debate on the issue, hasn’t been visible on the issue. Since 2009, Gov. Sean Parnell hasn’t written a letter in support of the treaty, nor has he testified on it, according to his spokeswoman. Instead, he appears to have ceded the whole issue to his lieutenant governor, Mead Treadwell.

What it means to Alaska

Formally called the United Nations Convention on the Law of the Sea, the treaty sets the rules for ownership of the ocean and all of its bounty, both above and below the seabed. It has the potential to affect United States interests in the Gulf of Mexico, areas off the Pacific Northwest, and California.

Supporters from all sides, from environmentalists to industry, say that if the U.S. doesn’t ratify the Law of the Sea, the country stands to lose out on both potential riches and environmental protections.

The thawing Arctic Ocean is opening up shipping, tourism and oil exploration, with the eight countries bordering it all vying to claim that natural resource-rich territory lies within their respective “economic zones.” The big question is who has the right to the spoils. Enter the treaty, signatories to which are legally bound to the rules and regulations it creates.

Thanks in part to legislation passed by former U.S. Sen. Ted Stevens, the United States routinely claims special rights — particularly fishing and transportation rights — within 200 nautical miles of its coast. These are called Exclusive Economic Zones. But the Law of the Sea treaty could extend those rights if a country can prove to the United Nations that the continental shelf — the underwater portion of the continent — extends beyond that limit.

The Arctic, to be sure, is not the only location where the U.S. might claim an extended continental shelf. Other places are in the Northwest and California coasts and in the Gulf of Mexico. But the Arctic’s outer continental margin is believed to be the biggest, extending anywhere from 350 to 600 miles off the coast.

The Russians have mapped their ocean floor and have submitted Arctic claims, and Canada is preparing to. If the treaty is not ratified, the U.S. can’t legally contest any resource disputes occurring in these waters, nor can it monitor shipping in the Arctic.

So far, the European Union and 160 nation-states have ratified treaty. The U.S. is one of 18 countries, and the only Arctic national, that have not done so.

What is Alaska doing to help?

Last year, Murkowski told the Alaska Dispatch, “I think we can get 67 votes needed. And I need to work Republican colleagues to do that.”

More than 14 months later, however, the prospects look dim for passage anytime soon. In July, Sen. John F. Kerry, Massachusetts Democrat and Senate Foreign Relations Committee chairman, planned to bring the treaty to a vote in July. Those plans were scuttled, however, when DeMint announced that he was able to get 34 Republican senators to vow to vote against the treaty, meaning it was all but dead.

This, even though the treaty has the support U.S. Chamber of Commerce, the American Petroleum Institute, the military establishment, all former Secretaries of State, and nearly every powerful environmental group.

Murkowski remains hopeful. “She remains optimistic that the treaty’s benefits for the nation will become self-evident across party lines and that momentum on Capitol Hill will gravitate towards the long-term positive impacts,” her spokesperson said in an email.

The powerful Heritage Foundation, the tea party and Ron Paul supporters have other plans. They have vowed to keep the treaty off the table.

Lt. Gov. Mead Treadwell is doing his part to keep it on the table. Although he says he has concerns about the treaty, Treadwell, who has a long history working for the treaty and for Arctic issues, has worked diligently toward passage. He has testified repeatedly in front of Congress, regularly partakes in the state department-chaired monthly Arctic Policy Group meeting, attends conferences where the treaty is discussed, and leads Alaska in its representation to the Arctic Council, where the Law of the Sea is the agreed-upon legal framework for resolving Arctic issues.

It’s less clear where Parnell stands on Law of the Sea. In 2009, shortly after he was handed the reins by Sarah Palin — who supported the treaty — Gov. Sean Parnell testified before the United States Senate Subcommittee on Homeland Security Appropriations.

“I strongly urge the Senate to ratify the United Nations Convention on the Law of the Sea … Without ratification, the U.S. cannot fully participate in adjudication of these claims,” he said.

Three years later, when asked about his support, his spokesperson Sharon Leighow said in a terse email that she knows the governor “has concerns regarding the U.S. maintaining its sovereignty in relation to other nations.”

She said that she was unaware of any letters he’s written or any other testimony he’s given on this issue.

In July, Department of Natural Resources Commissioner Dan Sullivan was invited to testify in front of the Senate Foreign Relations Committee about the treaty. He declined however. His spokesperson, Elizabeth Bluemink, sent the Dispatch the following statement about why he did so:

“Commissioner Sullivan was informally asked in July to testify at a July hearing. We informed the Governor’s Office as we do with any request for State of Alaska Congressional testimony. Between issues of scheduling, determining who would be the most appropriate State of Alaska official on this issue, and being properly prepared, we ended up declining that informal invitation.”

Even former Gov. Sarah Palin, arguably the mother of the tea party, understood the importance of the treaty to Alaska. In 2007 Palin wrote a letter to the Senate to express her support:

… If the U.S. does not ratify the convention, the opportunity to pursue our own claims to offshore areas in the Arctic Ocean might well be lost. As a consequence, our rightful claim to hydrocarbons, minerals and other natural resources could be ignored..

In a March 2009 email, she wrote that Alaska “must speak louder on this.” Less than four months later, she resigned.