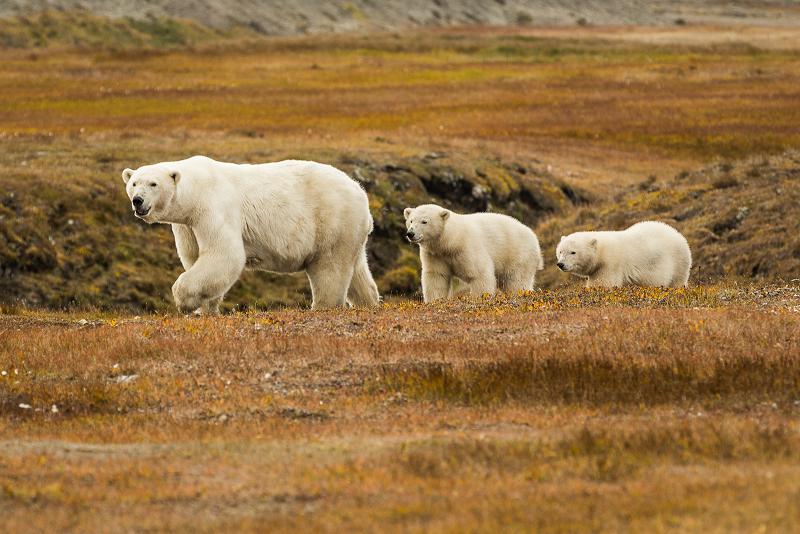 When hunters from the Arctic Alaska community of Kaktovik bagged a bowhead whale in early September, it wasn’t just the community’s villagers — who rely on the meat to help them get through the cruel winter months — who rejoiced.

Equally pleased were the polar bears that congregate in the community, feasting on scraps of the whale carcass, gorging themselves on whatever bits were left by villagers.

The remains of that whale drew a record number of polar bears to the area on Sept. 13, when researchers, who closely monitor the fluctuating polar bear populations in and around the community, counted 80 bears in a single day.

While the whale carcass is one reason for the polar bear bonanza, scientists wonder if there isn’t another reason. Namely, the record retreat of Arctic sea ice from the northeast coast of Alaska into the Beaufort Sea.

Polar bears spend most of their lives on sea ice, dining on ringed and bearded seals, the fatty, high-calorie meat-and-potatoes of their ursine diet. But in the summer months, when the sea ice retreats far from shore, polar bears go to the ground and rely on fat stores saved up during winter. They don’t fast completely, but meals are harder to come by and less well-suited to polar bear physiology.

“With the warming of the earth and the attendant decline of the sea ice, what we’ve seen is that in those areas that used to be annual ice only, the ice is leaving earlier and returning later, forcing the bears to fast longer,” said Dr. Steven Amstrup, chief scientist with conservation group Polar Bears International.

This year’s sea ice levels have been record-shatteringly low. The all-time record for sea ice melt was broken on Aug. 26, with weeks of melting left. By the time the ice started refreezing on Sept. 16, an additional area the size of Texas had melted.

How healthy are bears on Alaska shores? 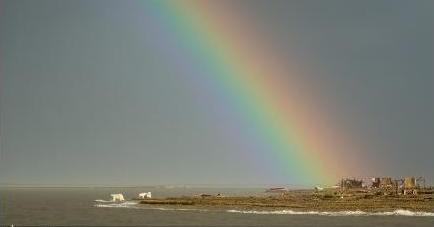 Is spending more time on land in Alaska’s far northern reaches a bad thing for polar bears? Well, that’s hard to say. The polar bears of the southern Beaufort Sea are the second-most researched population of the bears in the world, behind those of western Hudson Bay in Canada, according to Susi Miller, a wildlife biologist with the U.S. Fish and Wildlife Service.

Along with the U.S. Geological Survey, Fish and Wildlife has conducted bear counts along the northern Alaska coast, from Barrow to the Canadian border, for about the last decade.

According to Miller, it isn’t clear what physical effect being ashore has on the polar bears of the Beaufort, though scientists are working to figure it out.

“Determining whether more bears on shore is a good thing or bad thing is a difficult task,” Miller said. “Certainly, increasing numbers of bears in coastal areas can result in more human-bear interaction, which can then result in more conflict. As far as from an ecological point of view, how they fare in terms of survival, they’re trying to address that question.”

Researchers from USGS and the University of Wyoming are leading the inquiry. Ph.D candidate John Whiteman is compiling data from research conducted between 2008 and 2010, when scientists and biologists collected tissue samples from polar bears both on shore and out on the ice in early, mid and late summer. They also attached GPS collars and tags to some bears to track their movements.

“The inferences that we’ll end up drawing (from the data) will relate to diet and overall health, both of the bears on shore and on ice,” Whiteman said. With it, they’ll try to determine if the bears that choose to spend longer out on the ice are healthier than those bears on shore, or vice versa.

Whiteman said that the bears are used to their cycle of time on the ice versus time on shore. The length of time in each place has changed recently.

Whiteman estimates the research will be finished within a year, but he also said that resolving some of the unexpected curveballs from the study have made compiling the results more interesting. For example, he said it was “a bit of a surprise” to see how much the bears moved around from ice to shore or between ice patches in the summer.

“It’s like any other wildlife study,” he said. “You have to be a little bit flexible. You can try to control every variable just perfectly, but you get out there and see that the animal does something a little bit differently.” 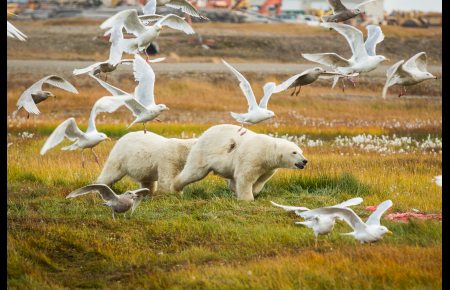 While it’s not yet clear if bears are better or worse off when coming ashore in Alaska, that other well-researched population in Hudson Bay has a long history of coming ashore in the summer months.

“Historically,” said Steven Amstrup, “they’ve been forced to come ashore after being able to gorge on seals and store up on energy in the winter months because that sea ice is moving farther out, into less productive waters.”

He said those bears tend to be leaner because they spend more time ashore, eating whatever they can find, including kelp, smaller land mammals, or fish if they can get them.

“Every bear wants to maintain its weight, and they’ll eat whatever they can,” Amstrup said. “But if they don’t have something to eat, they’ll mostly rest. In Hudson Bay, the bears mostly rest.”

But in the Beaufort, the retreat of sea ice far beyond the shallower — and more seal-friendly — waters above the undersea continental shelf is a recent phenomenon.

Polar bears are exceptionally strong swimmers, though — one female polar bear has been recorded swimming more than 400 miles in the Beaufort, though it cost her 22 percent of her body weight and the cub swimming with her. One controversial study also recorded several polar bears thought to have drowned as the result of a swim that was too long through stormy weather.

Karyn Rode, a wildlife biologist with the USGS, said that bears will arrive in Kaktovik at various points in the summer, indicating that some may be making longer swims as the sea ice melt continues.

“Bears that have been onshore feeding on the whale remains become very dirty,” she said. “Then the residents (of the community) will see new, white bears, which indicates that they’re just arriving on shore.”

Those whales are a big reason why Kaktovik has such a glut of polar bears, and they may be helping them stay healthy. According to Susi Miller with Fish and Wildlife, the remains of that whale caught earlier this month in Kaktovik were eaten within about 10 days, and initially, the bears acted aggressively toward each other as individuals tried to get their share. Even a well-harvested whale has a lot of meat remaining for ravenous bears.

She said that of all the bears observed, there were a few that looked skinny. But most appeared to be in “average” or better health. 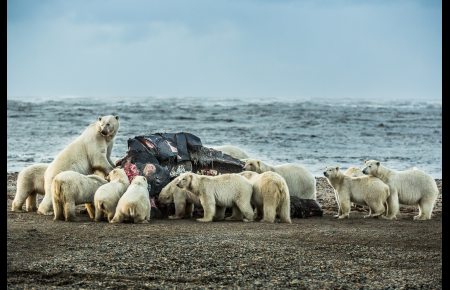 Were thes 80 polar bears observed in Kaktovik on Sept. 13 an anomaly? The number is certainly higher than any previously recorded observations, and it’s tempting to link it to the record-low sea ice for the year.

But the last six years have seen the six lowest extents of sea ice on record, and the high daily number of polar bears observed in and around Kaktovik in the past seven years have been significantly lower than those observed in 2012. Between 2005 and 2011, the most polar bears observed on one day was 41, in 2011. In 2010, only 18 bears were spotted on the most active day. In 2007, which had previously held the record for low Arctic ice, 37 bears were observed.

And the counts can fluctuate quickly, too: Miller said that a second whale, likely one injured and lost by whalers in recent weeks, had washed ashore about 18 miles from the community. By Wednesday, the number of bears observed near Kaktovik had dropped to 33, likely because the bears were on their way to that other, even more bountiful, carcass.

It’s difficult, then, to draw the conclusion that low levels of sea ice contribute to the number of polar bears onshore in the Alaskan Arctic — or whether that hurts or helps the bears. Research has drawn at least one correlation between polar bears and retreating sea ice: a 2008 study, authored in part by Rode and Miller, concluded that the extent of sea ice does contribute to how long the bears spend ashore.

As always, the subject of climate change, its effect on Arctic ice, and the subsequent effect on polar bears is controversial. Researchers are trying though, little by little, to replace that controversy with hard science.