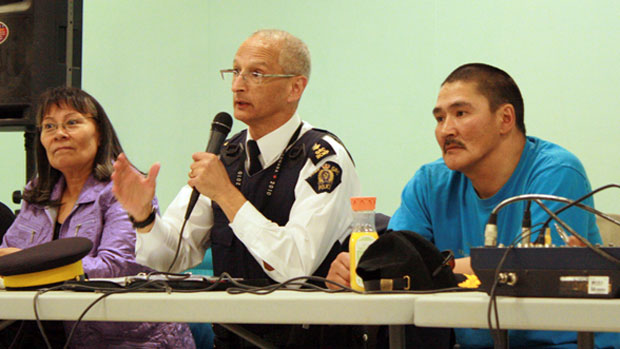 The government in Canada’s eastern Arctic territory of Nunavut wants to increase the number of police officers in the territory, according to a Justice department official speaking at a public meeting in the community of Clyde River on Tuesday.

The move comes after a series of violent incidents in Nunavut this summer, some targeting RCMP.

At the meeting with RCMP and government officials people in Clyde River described how officers seem removed from the community.

They work long hours, on call, so they have little time to socialize, or participate in community life.

Rebekah Williams, Nunavut’s assistant deputy minister of Justice, said that’s one of the reasons the government is looking for ways to increase the number of officers.

“It’s not only for people to have a rest,” she said. “It’s also about when one goes on holidays, somebody has to relieve that person. So it’s a cost for relief, someone going back and forth.”

Nunavut RCMP have been vocal about the need for more officers, saying they’re seeing more and more violent crime in the territory. Most communities now have two officers. RCMP have suggested they should have three.

That prompted RCMP Supt. Hilton Smee to issue a plea.

“Every community in Nunavut has to encourage their young people to join with us,” he said. “We want more Inuit people.”

Nunavut already has one of the highest police-to-civilian ratios in the country, but in the whole territory only nine officers are Inuit.