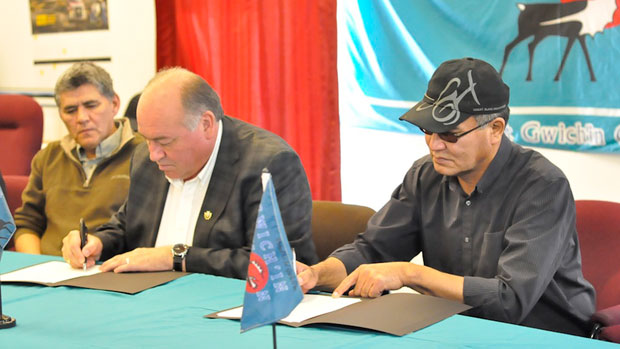 The Gwich’in Tribal Council officially signed the devolution Agreement in Principle for Canada’s Northwest Territories on Friday in Aklavik, N.W.T.

The council and the premier of the N.W.T. are calling it a new beginning for both sides. They agreed to sign the agreement last month during a meeting.

A devolution agreement would give the N.W.T. more province-like powers and control over land and resources.

“I’m pleased that the Gwich’in tribal council has decided to rejoin us at the table,” said Premier Bob McLeod.

McLeod said he’s delighted by the council’s sudden change of heart – just three months ago, the council, under former president Richard Nerysoo, was firmly against devolution.

It had already spent a half million dollars in legal fees to oppose the AIP at the Supreme Court.

When Robert Alexie Jr. took office, he consulted with Gwich’in communities. The council then suddenly dropped the lawsuit.

“Hopefully the devolution agreement will give us more control over our lands and waters in the N.W.T.,” said Alexie.

Alexie said it’s better to negotiate with the territory than to be on the outside.

“It will give us the ability to work more closely with the GNWT and that’s something we’ve been lacking over the last couple of years, and hopefully our relationship will change and be more one of cooperation,” said Alexie.

The Gwich’in also signed a Memorandum of Understanding with the territorial government. The understanding will try to increase the level of government work contracts going to Gwich’in business entrepreneurs to at least 50 per cent in the Gwich’in Tribal Council settlement area, by giving them first consultation rights.

There are now four aboriginal groups in the Northwest Territories who have signed on to the agreement-in-principle.

The devolution AIP still faces resistance from some remaining aboriginal groups in the Northwest Territories.