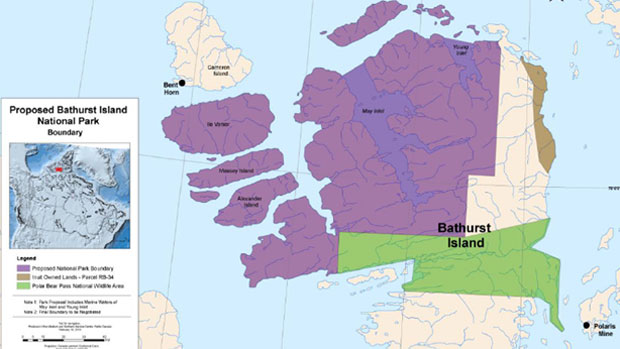 After nearly two decades of work and a few stumbling blocks along the way, Nunavut’s fifth national park is entering the final stage of the approval process.

The proposed Qausuittuq National Park would be near the community of Resolute, in Canada’s eastern Arctic territory of Nunavut, and encompass most of Bathurst Island and a few surrounding islands. The Inuit Impact and Benefit Agreement negotiations for the park were essentially complete about a month ago.

Parks Canada expects the agreement will be approved and signed in 2013.

Kevin McNamee, a Parks Canada spokesman, said the park will protect habitat for wildlife like Peary caribou, Arctic wolves and muskoxen as well as the vegetation they need to survive.

“An important part of this park is (also) to communicate the importance of this land and its wildlife to Inuit culture and the role it has played in sustaining Inuit people in this region,” he said.

Goadamee Amagoalik, who has represented the community in the negotiations since 2009, said the only opposition community members expressed was over the proposed boundaries.

He said some residents thought the park should be named Ajurnarmat, which means “can’t be helped.”

“There were suggestions that we should call it that because we wanted to have the whole north Bathurst (Island) as a national park but (the) federal government wouldn’t want it.”

He said he believes Ottawa wants to limit the park boundary because of nearby resources. But Amagoalik added Resolute residents are happy more jobs and a visitors centre are coming to the hamlet.

Once the impact and benefit agreement is signed, it could still be months before the park is officially open.

Parks Canada will be holding public meetings on the proposed Qausuittuq National Park Nov. 27 in Iqaluit and Nov. 29 in Resolute Bay.