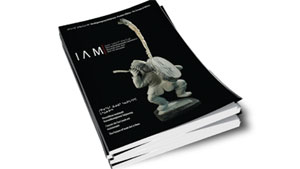 Put out by the Museum of Inuit Art in Toronto

A new magazine devoted to Inuit art has been launched in Toronto, Canada.

The Inuit Art Magazine is available in Inuktitut, Inuinnaqtun, English and French.

It’s put out by the Museum of Inuit Art based in Toronto, which is a non-profit institution which exclusively features Inuit artists.

“It really looks as holistically as possible the whole scope of the field of art made by Inuit, so that’s visual arts, that’s performance, that’s film in all regions of Canada as broad as we can be,” said Alysa Procida, the magazine’s executive director.

Tom Smart, an art advisor and a writer, said having the magazine shows the popularity of Inuit art and how it continues to change.

“More and more people want to know about it, not only the historical artists but also how it’s developing in a plurality now.”

The 200-page magazine is available for free online and will be put out twice a year.