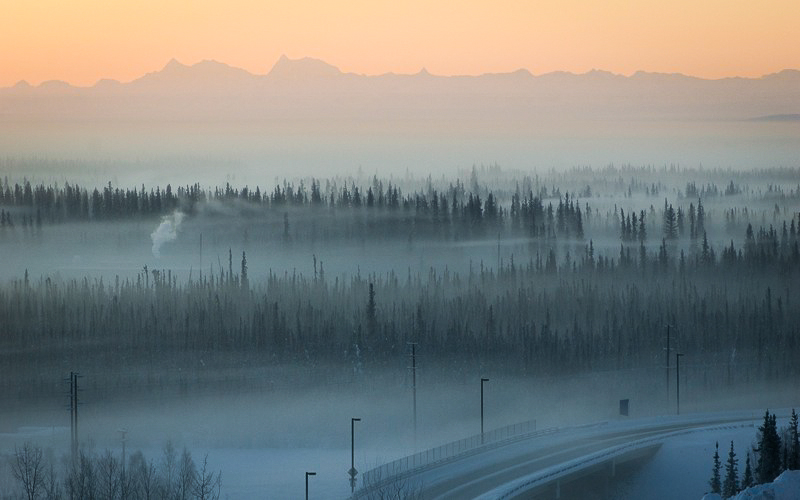 FAIRBANKS — Longtime Fairbanks-area resident Suzanne Fenner doesn’t have to check the borough’s air quality monitoring website to see whether or not pollution is high. She just looks out the front door. When she sees smoke rolling through, she knows she’ll be coughing soon enough.

Fenner, who’s lived in Fairbanks since 1986, was shocked to learn recently she’d developed asthma. After being sick off and on for months, her doctor told her the asthma was a direct result of air pollution.

“Sometimes I feel like our days of living in this community are numbered,” she said. “We’re going to be forced to move away from family and friends. This environment is beautiful, but it’s toxic.

Fenner and others are fed up with the toxic air quality that persists through much of the winter in the Fairbanks North Star Borough.

Neighbors developing asthma. School children unable to play on the playground. Residents leaving the area to protect their health. The smell of campfire drifting through urban areas despite no blaze. A brownish haze blanketing the region on the coldest days, when temperatures can drop 50 degrees below zero, as they have recently.

But Fairbanks’ air quality issues go deeper than a few residents with fireplaces and wood-burning stoves wanting a cozy fire on cold winter days. With high energy prices strangling the region, residents are turning to wood — the cheapest fuel source — to survive. Wood smoke, which can make up to 70 percent of the pollution, gets trapped beneath a strong inversion, which lingers when sub-zero temperatures grip the low-lying basin.

That smoke is linked to asthma, heart attack, strokes and premature death. Tiny particulates wood smoke puts into the air are so small they pass through lung tissue into the blood stream. Children breathing smoky air sometimes have reduced lung function and lower IQs. Health problems can occur even in the short term.

The Environmental Protection Agency has taken note and designated part of the Fairbanks North Star Borough as a “non-attainment area” out of compliance with the Clean Air Act. Any day with a 24-hour average of more than 35 micrograms of particulate per cubic meter is considered in violation. Get enough days per year, and an area is considered out of attainment.

On Tuesday, a monitor in North Pole, just south of Fairbanks and one of the borough’s most polluted areas had a reading of over 260 micrograms. The levels of pollution are so high, that at certain points this winter, it’s been unofficially considered some of the worst in the country, on par with some of the worst air quality in the world. By contrast, on Thursday the city of Anchorage, Alaska’s largest city with a population nearly 10 times as large, had an air quality index reading of 30 — meaning there was less than 15 micrograms of pollutants in the air.

The borough, which encompasses an area roughly the size of Fiji — has been working for years to clean up its air. If it fails to do so, the federal government will impose its own restrictions, which range from disruptive to draconian. The state could lose federal highway funding, businesses could be turned away and residents of the borough could even be barred from driving downtown during the days when pollution is heaviest.

No doubt Fairbanks, a stronghold of independent citizens who favor small government, would oppose that. But those same small government advocates may be making the issue more divisive than it already is.

That same November, the deep cold of an Interior Alaska winter arrived sooner than expected and with it, the pollution trapping inversion. Air quality advisories were issued as early as October.

The solution to high energy prices and miserable air quality? Borough Mayor Luke Hopkins and other Interior Alaska legislators say natural gas. While multiple proposals have been suggested — a natural gas trucking project or a pipeline from the North Slope — both are at least three or four years from ever delivering (the pipeline, which under one proposal would eventually reach Southcentral, in the midst of its own gas supply woes, isn’t expected to come online until 2020 — at the earliest.)

So what happens in the interim?

Carrie Dershin’s two children attend The Watershed School. It’s a school of choice, a charter school with an emphasis on the outdoors and community. Skis and ski boots line the hallways, next to tall forest-green lockers.

But there’s an irony here. The school, which serves about 190 students, is located in a west Fairbanks neighborhood, in a low-lying area near the Chena River. The school consistently records some of the worst air quality in school district. Terrible air has kept students trapped indoors multiple times this winter.

Dershin is working with other parents on ways the school — and the community — can come together to find solutions.

“Either I can whine and say it sucks, or I can do what I can,” she said.

About 100 people packed the school gym Tuesday night to hear how the borough is trying to cope with the situation. Borough air quality manager Dr. Jim Conner walked residents through the issue.

Warm weather had lifted an inversion over the city that night and air quality was considered healthy. Still, it was hard to ignore the faint smoky smell inside the gymnasium.

Maps of the area featured big red spots on the hardest hit areas. One the reddest? The Watershed School.

Dan Bates admits that he was once ignorant about that. When he moved to Fairbanks in 2007 to attend the University of Alaska Fairbanks, he didn’t know the risks of burning wood. Looking for a cheap fuel source, he’d burn anything he could get — including chairs and particle board, some of the worst pollution offenders.

Over time, he realized the health impacts of that burning as well. The emissions put particles smaller than an E. coli bacterium and 50 times smaller than human hair into the air. Entering the body through the lungs, they pass through lung tissue into the blood stream.

Dawn Brashear knows those health problems all too well. A school counselor at Woodriver Elementary School, she’s endured years of antibiotic treatments to fight lingering lung infections, two sinus surgeries and a cyst in her sinus pathway. A former aerobics instructor, Brashear had to stop due to her health concerns.

One of Brashear’s colleagues is out of state right now, getting treatment for a blood clot in her lung; the woman’s doctor said it was caused by the pollution.

Woodriver, located just outside of Fairbanks, is in a neighborhood of single-family houses. Across the street from the school are two hydronic boilers, suspected to be the main source of Woodriver’s pollution woes. The school consistently records some of the highest pollution numbers in the district.

Brashear is the chairwoman of the Woodriver PTA. This year the PTA and principal decided to change the way they report pollution. When someone smells or sees a smoky haze in the hallway, the report it to the principal, who files a report on behalf of the school with the state Department of Environmental Conservation. Each time, it sends out 515 complaints – one for each student and staff member attending the school. So far 10 complaints have been lodged – or really 5,150.

It might be extreme, but it’s illustrative of the frustration among residents.

“We are victims of the smoke and no one is protecting us,” Brashear said.

Glenna Baca says Love, In the Name of Christ — known as Love, INC, a non-profit that pools church resources in the Fairbanks area — gets 15 to 20 calls a day from people seeking energy or rental assistance.

Often one problem just leads to another. Some people cannot afford their oil bills so, left without alternatives, they try to heat their house with electricity — some using electric ovens. With electricity an expensive prospect (Golden Valley Electric Association includes a fuel surcharge on every bill) finances can spiral out of control. Baca said people sometimes come to them a day before getting their electricity turned off, asking for help paying their $1,000 bills.

Love, INC, which reaches out to church parishioners to help cover those costs, usually can’t help people at that point.

“There’s just no way people can pay those bills,” she said.

Baca said only three church woodlots remain in the area, down from six. The other three were closed down after the wood kept getting stolen. Reports of fuel being siphoned from unoccupied homes have residents locking up their fuel tanks.

Few are hit harder than the elderly on fixed incomes.

“You’re making decisions on whether you’re buying prescriptions or heating fuels,” she said. “Those are the ones that aren’t always calling for assistance.”

The Fairbanks North Star Borough has a series of programs designed to help with air quality.

•A wood stove change-out program, where residents are reimbursed for replacing older, less-efficient stoves with ones that burn more efficiently.
•A Split, Stack and Store program that encourages wood burners to properly store and dry their wood before winter. Dry wood burns hotter and pollutes less.
Hopkins hopes to introduce an ordinance in January that would offer $30 a day to residents who commit to switching to oil on the coldest days of the year. Whether or not the measure will be approved by the conservative Fairbanks North Star Borough Assembly is a question.

Getting natural gas could be the silver bullet energy fix Fairbanks needs. But how? And when?

Recently, Gov. Sean Parnell introduced a $355 million financial package — a mix of bonds and state grants — that would be used to begin construction on a natural gas pipeline from the North Slope.

Heil said as long as the borough can prove it’s making a “good faith” effort to improve air quality, the EPA may be lenient with its penalties.

“It’s not an easy process and not a fast process,” she said. “It takes time. The bureaucracy goes slow and slower the higher you go.”

Former North Pole Mayor Doug Isaacson is headed to Juneau in January to serve as a state representative.

Interior energy woes are important to Isaacson, who will chair the House Energy Committee. He regularly hears from residents struggling with energy costs. Isaacson hopes to take their message to Juneau, where he’ll work to find relief. It’ll come down to developing Alaska’s resources in a way that benefits the whole state.

His colleagues from across the state are beginning to realize the dire straits of Interior Alaskans and he’s optimistic they’ll take action.

Why? Because if Interior Alaskans have to leave because of the high cost of energy, they aren’t moving to Anchorage or Juneau. They’re heading out of state, he said. That’s a loss not only to the state, but to local economies boosted by their spending.

He said something has to be done, and soon.