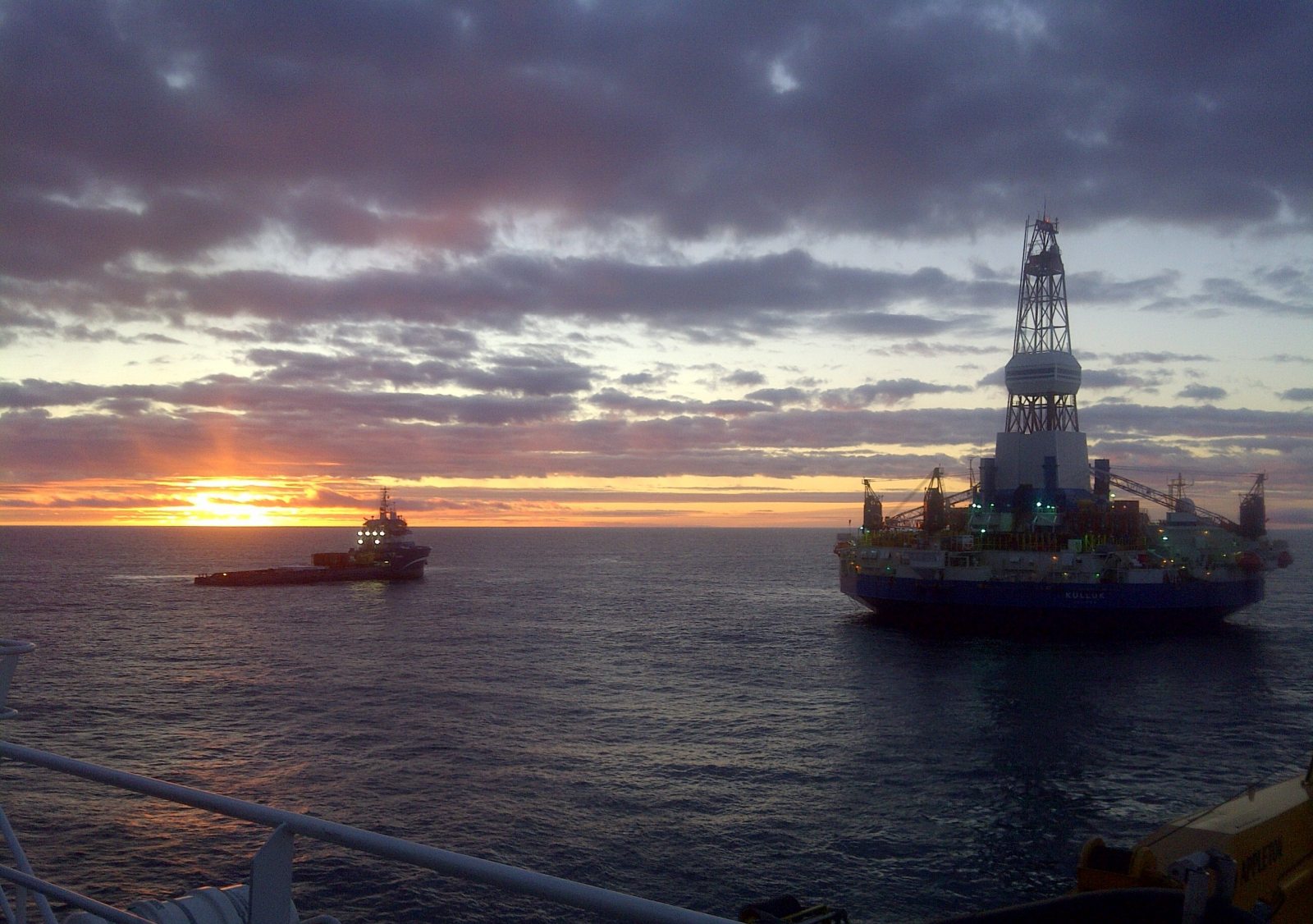 Perhaps more important than the clamour of environmentalists, the grandstanding of politicians, or the blunders of Royal Dutch Shell‘s own making is how long oil prices will remain high enough to support Arctic exploration in northern Alaska’s Beaufort and Chukchi seas.

Not long, believes one analyst watching the clouds gather over the Lower 48, where a shale-oil boom and new railroad projects are expected to push more oil toward the same West Coast refineries where Alaska crude is processed.

That could weigh heavier on Arctic drilling than pressure from environmental groups and probes that have been launched following the New Year’s Eve grounding of Shell’s Kulluk drilling rig near Kodiak Island. And if Shell backs out, other companies eyeing one of the world’s last untapped oil basins are bound to scurry, too.

Five years ago, oil prices settled around $100 a barrel and heavily reignited Shell’s interest in the Arctic Ocean: The company plunked down more than $2 billion for a chance to drill into the relatively shallow floor of the Chukchi Sea.

In the early 1990s, low oil prices led Shell to abandon its original foray into the offshore Arctic, despite having punched more than 20 holes, including some that found oil.

Fast-forward to 2013 and it’s hard not to wonder if history will repeat itself. In total, Shell has spent $5 billion on leases, operational costs and other expenses, but the current exploration phase of that effort might just be the easy part.

To get any discovery to market in the years to come, Shell will have to clear more regulatory hurdles, fend off additional legal battles, and spend billions more to create concrete or steel production platforms, essentially remote islands to process crude. The company also will need hundreds of miles of pipeline to ship oil across one of the planet’s most inhospitable and environmentally protected regions.

Shell spokesman Curtis Smith said it’s too early to speculate on how the Kulluk grounding will impact Shell’s ongoing exploration program off Alaska.

“We will first complete an assessment of the Kulluk, but our confidence in the strength of this program remains,” he said.

At what oil price — or at what point in time — does the project become uneconomic? Smith said he couldn’t answer. And what will happen to oil prices in the coming years is anyone’s guess.

With more and more shale oil reaching the West Coast, the price of Alaska North Slope crude is bound to fall in the next two years, said Felden. It will drop by at least $15, putting additional pressure on Shell to back out. The price has recently been perched at about $110 a barrel.

“Production has gone up by about 800,000 barrels (a day) in the Lower 48, and relatively speaking, it’s way less expensive to get oil out of the ground there than in the Arctic Ocean,” Felden said. “At the same time you have price pressure coming from increased Canadian production. It seems that developing this prospect in such an expensive area is likely to become uneconomic in the next four to five years.”

Mouhcine Guettabi, an assistant professor of economics at the University of Alaska Anchorage said the Institute has begun internal discussions about studying the implications of that increased shale oil on Alaska prices, but no study has been launched yet.

“It’s something we are looking at, but we haven’t done independent work to make definitive statements regarding” the impacts, Guettabi said.

Alaska Labor Department economist Neal Fried also didn’t know what effect shale oil in the Lower 48 would have on Alaska prices. But more oil is being discovered around the world, including deep basins in Africa and Brazil. And other countries are hoping to spark their own shale booms.

“We’ve seen this before,” Fried said. “It’s a classic case of high prices for a long time that encourage exploration and development, so you get more production. The supply increases and that very often affects prices.”

The state tax division anticipates stable prices for North Slope crude for many years, according to its revenue sources book. Those prices will grow slightly in each of the coming years, reaching $123 in 2022, the division predicts.

John Tichotsky, chief economist at the Department of Revenue, said about 30 experts helped establish those estimates. Among the data they considered were forecasts from the U.S. Energy Information Administration, analysts’ surveys and dozens of factors that could have long-and short-term effects on oil prices. Shale-oil extraction falls under a broad category that includes other unconventional efforts.

“You’re isolating one out of 100 major factors,” Tichotsky said.

Perhaps Shell, one of the world’s wealthiest oil companies, expects oil prices to remain high when it finally reaches oil production, said Felden. Shell has said that could take a decade or more.

Fadel Gheit, senior energy analyst for Oppenheimer and Co., doesn’t think Shell will back out.

“This is like an elephant giving birth,” Gheit said. “Don’t look at your watch because it’s not an instant happening. It’s going to take a while.”

“Obviously, everyone hoped they would do better, and because of the circumstances with BP’s (Gulf of Mexico) oil spill and then with mishaps with Shell over the last six or seven months, it makes things more complicated, but it will happen eventually,” he said.

Still uncertain is whether Shell will drill in Alaska this summer. Last year, the Interior Department permitted the company to conduct limited drilling at its prospects in the Chukchi and Beaufort seas, though drillers had to stop nearly a mile short of suspected oil-bearing zones. The two wells Shell started will set the stage for deeper drilling this summer, if the company gets the green light.

The grounding of the 20,000-ton Kulluk could hobble those plans, in part because the manpower and equipment needed to free the rig earlier this month has put the brakes on other critical efforts. Among them:

• The once-crushed and now-repaired containment dome, essentially a giant vacuum designed to suck up oil in a worst-case scenario, must pass regulatory muster before Shell can drill deep. It was due to undergo new sea trials in December. That hasn’t happened yet. Final tests will “take place in the weeks ahead. No specific timeline has been set,” Smith said by email.

• The other drill rig Shell has hired for the Arctic, the 46-year-old Noble Discoverer, remains in Seward. Shell had hoped to have the ship in Puget Sound by now for winter maintenance. It was held up by the Coast Guard in November after an inspection of the ship found numerous violations. Enough of those issues have been resolved to allow it to sail, but resources that would be used to move the Noble Discoverer are still dealing with the Kulluk. Smith said the Noble Discoverer’s traveling plans will be reviewed by the U.S. Coast Guard before it sets sail.

• Then there’s the Kulluk, the rig that wrecked near Kodiak Island as it was being towed to Puget Sound for winter maintenance. The ship remains in safe harbour in Kiliuda Bay. It’s still undergoing a careful review for damage after the grounding. “Future plans for the Kulluk will be determined once the (assessment) report is finalized,” said a release from Unified Command, the multi-agency response group dealing with the Kulluk’s recovery.

Shell needs both its Arctic drill rigs on scene before it can tap into oil-bearing zones — one can drill a relief well for the other if there’s a blowout. So too much damage to one rig could hinder Shell’s plans for 2013.

Watching with interest are ConocoPhillips and Norwegian, which have also purchased federal leases in hopes of conducting offshore Arctic drilling.

ConocoPhillips is pressing ahead with plans to drill up to two exploration wells in its Devil’s Paw prospect in the Chukchi Sea during the summer and fall of 2014, after the ice has melted, said Natalie Lowman, a spokesman. The company sees the Kulluk grounding as a lesson that can improve future exploration, she said.

And Statoil, which has a share in Devil’s Paw, is in a holding pattern, continuing to wait and see how Shell fares, said the Norwegian company’s spokesman, Jim Schwartz. Last summer, Statoil said it would put off drilling for a year or possibly longer, citing concern over Shell’s regulatory obstacles.

“There has been no change in our overall plans,” said Schwartz in a written statement. “As we said previously, we continue to believe it is important to step back and observe the outcome of Shell’s efforts before finalizing our own exploration decision timeframe.”

The company is working toward submitting an exploration plan sometime this year.

“However, no firm decisions have been made with regard to drilling in 2015,” he said.