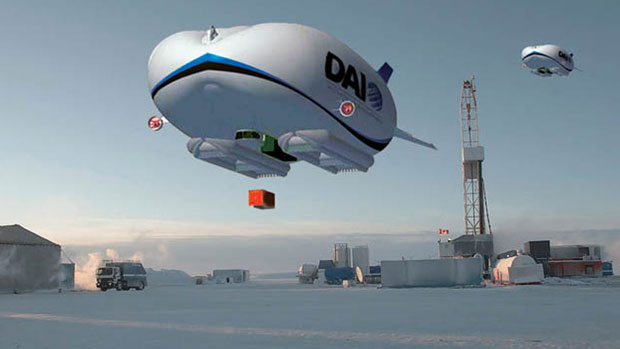 It’s time to rethink the blimp, a Canadian House of Commons committee suggests in a new report.

Airships are often associated with the Hindenberg crash of the 1930s, and their development was overtaken by that of the airplane, reducing their use in recent years mostly to props in ad campaigns.

But there’s room for certain kinds of them to play a new role in Canada, especially when it comes to reaching remote communities in the North, the transportation committee recommended in a recently released report.

“Hybrid air vehicles may one day provide a superior solution, as they can travel over snowfall, frozen water or impenetrable terrain, and require no roads or rail installations to operate,” says the report.

The committee’s look at airships was part of a broader study examining more creative ways to address some of the shortfalls in Canada’s transportation sector.

When it comes to airships, a number of barriers exist to putting them into more widespread use, the committee heard.

Among them is a lack of infrastructure, trained personnel and licensing regimes, said Barry Prentice, a professor at the University of Manitoba and president of ISO Polar Airships, a research institute that promotes the use of the vehicles.

His was one of two groups that testified before the committee.

Prentice is adamant the time to start developing those capabilities is now.

“We certainly can’t afford to build gravel roads every place in the North and the airships are the most reasonable solution that we should be taking a hard look at.”

In addition to helping northern communities access food and supplies, they could have military applications. The U.S. military was expected to spend about $1.3 billion last year to acquire and develop airships and related technology for both cargo and surveillance.

Discovery Air Innovations told the committee that just to develop the vehicle they’d like to bring to Canada could cost $60 million to $80 million, but they are having difficulty obtaining support from banks or private companies that might be able to use one.

The government is equally wary about putting in money.

“As the committee does not wish to put taxpayers’ money at risk by investing in a business that cannot attract private capital, it focused on the question of whether the operator of a hybrid air vehicle would have the opportunity to compete for federal shipping contracts,” the report said.

So the committee has recommended a pilot project be launched via Public Works and Government Services to see whether the airships could work.

“The technology needs testing to ensure reliability. If the government were to abandon existing transportation modes in favour of a new option that failed to work, urgently needed goods might not reach their destination,” the report said.

Meanwhile, another government department has decided to forge ahead with funding — Natural Resources announced $2.2 million Friday to support one airship company.

Solar Ships is seeking to partially power the blimps using the sun, saying in a statement it will use the funds to keep developing the technology.

Both the committee’s report and the announcement of funding are important steps, Prentice said.

“This isn’t quite on the scale of building the Canadian Pacific Railway, but as far as the North goes it is,” Prentice said.

“Because if we don’t have a transportation solution for the North, we’ll never solve the problems of the North.”

The recommendation to take a closer look at airships is one of several made by the transportation committee in a report released this week studying new ways to get goods and people moved across Canada.