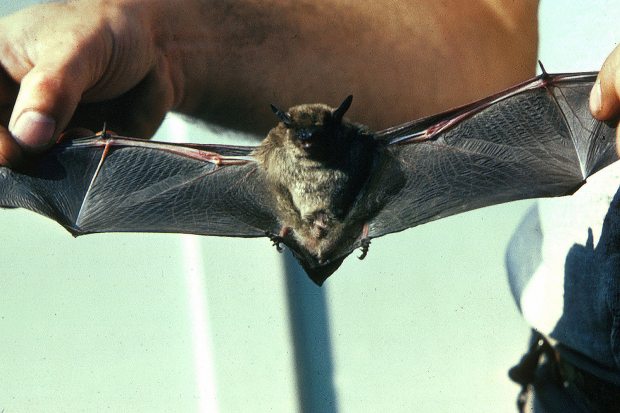 Glacier Bay National Park and Preserve, located in Southeast Alaska about 50 miles west of the state capital of Juneau, recently discovered it has an unusual species calling the park home.

It’s not a species that many associate with Alaska — the wolves, the moose, the bears, the birds or the bugs. Rather, it’s a different kind of creature altogether: the silver-haired bat.

Many Alaskans aren’t aware that bats call the state home. But in fact numerous bat species live in the northernmost state, spread across locales as varied as the panhandle in Southeast and as far north as Kotzebue, above the Arctic Circle on Alaska’s northwest coast.

Admittedly, even state biologists don’t know much about the nature of bats in Alaska, because they’re apparently spread widely but spotted infrequently. Though some bats are occasionally identified as living in caves in the state’s southern reaches and in attics and garages in more northern areas, researchers often aren’t even sure about these bats home.

And as the recent discovery of the silver-haired bat as a species native to Glacier Bay National Park shows, researchers don’t always know which bats live in which parts of the state.

But through citizen reporting of bat sightings around the state, and increased scrutiny of Alaska bat populations, biologists with the state Department of Fish and Game are working to increase their understanding of the leathery-winged mammals’ activities.

At the same time, they are also beginning to wonder if these species also need a conservation plan, with disease ravaging certain populations in the Lower 48 and the increased use of wind power — a potential threat to numerous airborne species thanks to the churning of wind turbines — in the Last Frontier.

Biologists had long known that the so-called little brown bat — the most widely distributed bat in the U.S. and in Alaska — was living in Glacier Bay National Park.

The realization that the silver-haired bat was a neighbor came as a result of acoustic monitoring that began last year at the park headquarters in Bartlett Bay, where researchers — including Southeast Alaska Department of Fish and Game biologist Karen Blejwas and park Environmental Protection Specialist Allison Banks — recently were able to distinguish the call of the silver-haired bat from that of its smaller, brown cousin.

The silver-haired bat is not unique to this slim section of Southeast, however, said Banks.

Visitors have previously reported seeing larger bats at the park, Banks said, and she’s even seen some herself, but the acoustic identification of the call of the silver-haired bat is the first concrete verification.

There are currently five species of bats known to live in Alaska. Four of those — the silver-haired bat, Keen’s long-eared bat, the California bat and the long-legged myotis — are native only to Southeast. Any bats spotted north of that region, under current knowledge of bat distribution in Alaska, are assumed to be the little brown bat.

Some older literature identifies a sixth species, the big brown bat, as a potential resident of Alaska. But according to Fish and Game Biologist Dave Tessler, that report was based on a single sighting that occurred in Alaska’s Interior in the early 1990s, and hasn’t been seen since.

“The big brown bat is not believed to be a full-time resident of the state,” Tessler said. “It is believed to have been brought in, possibly by a truck coming up the Alaska Highway.”

Bats are capable of living in colder climates, and are known to both hibernate and migrate south during the winter — though again, what exactly Alaska’s bats are doing is a bit of a mystery.

Tessler said that the little brown bat is known to migrate a couple of hundred kilometers in certain parts of the U.S. “But if you look at the distribution of our reports, they’re up in Fairbanks, and Fort Yukon, and St. Michael and Kotzebue,” he said. “We’re talking well over 400 kilometers or more for them to get far enough south.”

According Allison Banks in Glacier Bay National Park, recent research is revealing a little more about the behavior of bats in the park, particularly when it comes to their hibernation patterns.

“We know that we have bats that do overwinter here,” Banks said. “We assumed they were in a deep hibernation, but that turned out not to be the case. There are periodic hatches of aquatic insects throughout the winter, and the bats are probably foraging over lakes, ponds and streams. There’s always more questions, but the main thing we’ve found is that we don’t have deep hibernation for the entire winter; we have these little bursts of activity.”

But there are still a lot of mysteries. Where these bats are living is a common question for researchers, and one usually without an answer.

“There are still huge questions about just basic biology and ecology of bats (in Alaska,)” Tessler said.

Much of the current knowledge has come about as the result of a citizen reporting initiative that’s been going for almost the last decade, he said. People can contact Fish and Game and report a bat sighting — and provide evidence if it’s available.

Bats get kind of a bad rap, with their nocturnal nature and their less-than-cuddly appearance. Bats are also often associated, whether fairly or not, with the spread of rabies.

Tessler said that only two cases of rabies have ever been reported in Alaska bats, both in Southeast. The first case occurred in a little brown bat in Ketchikan in 1993, while the second was recorded in 2006 in a Keen’s long-eared bat on Prince of Wales Island.

Despite the rarity of rabies cases, Tessler still advised precautionary measures if a person has unexpected contact with one of the state’s bats.

“If somebody has contact with a bat, and they’re bitten or scratched, they need to get that checked out and have the bat checked out,” he said.

But perhaps the bigger threats today are to the bats themselves. With the growing knowledge of bats in Alaska, biologists are beginning to evaluate the need for a conservation plan, given a couple of circumstances that could lead to population declines in coming years.

In particular, scientists across the country are concerned about “white nose syndrome,” a fungal disease that was first recorded on the U.S. East Coast in 2006 but quickly wended its way to Canada and the Midwest. Though it has yet to be recorded in Alaska or West Coast states, more than 6.5 million bats may have died as a result of white nose syndrome, many of them little brown bats. The disease also thrives in the winter — a particularly bad omen for cold-weather Alaska.

Also raising red flags for biologists is the propagation of wind power and the resulting turbines that populate wind farms. The potential for airborne species to be killed in the spinning turbine blades is a concern for numerous animal populations, and Alaska is no exception. A particularly good fit for Alaska’s small, rural communities, numerous wind projects are currently in the works around the state, and several others have been completed in recent years.

Though it’s much harder to gauge the impact that such wind farms have on bat mortality rates, it remains something biologists will watch in coming years.

“It’s not just an intellectual curiosity anymore,” Tessler said. “We’ve got some things that could be conservation issues for these bats, and we’ve got to start addressing those issues.”