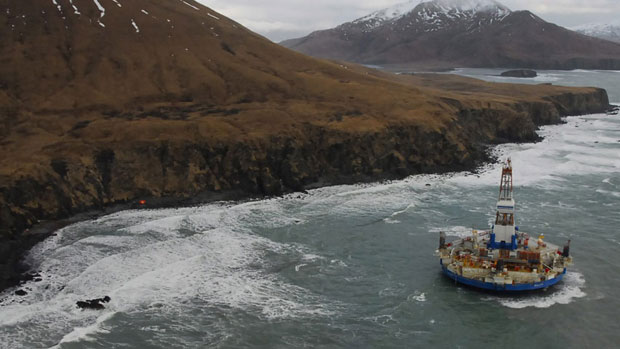 Turns over investigation to U.S. Department of Justice

The U.S. Coast Guard has turned over its investigation of violations on a Royal Dutch Shell PLC Arctic drill ship to the Department of Justice, officials said Friday.

The violations were found after the drilling season when the Noble Discoverer was in dock in Seward, Alaska. Shell’s other Arctic drill barge, the Kulluk, remains in a sheltered bay off Alaska’s Kodiak Island, where it was towed after grounding on New Year’s Eve.

The Coast Guard found 16 violations on the 571-foot (174-meter) Noble Discoverer after it completed drilling this summer in the Chukchi Sea off Alaska’s northern coast.

The violations included fire hazards and problems with the propulsion system that didn’t allow the ship to operate at a sufficient speed at sea to safely manoeuvre in all expected conditions.

Messages left after business hours Friday with the Department of Justice in Washington, D.C., and ship owner Noble Corp. in Sugar Land, Texas, which leases the ship to Shell, were not immediately returned.

Markey also sent a letter to Shell President Marvin Odum asking how the company plans to address problems and what changes will be instituted going forward.

“The reports that Shell may have been drilling this summer using a drill ship with serious deficiencies in its safety and pollution control equipment raise additional and continued questions about whether Shell is able to drill safely offshore in the Arctic, and raises serious questions regarding the nature and adequacy of Shell’s compliance with applicable laws and regulations,” Markey wrote in the letter to Odum.

Curtis Smith, a Shell spokesman, said in an email to The Associated Press that many of the issues raised by the Coast Guard have already been addressed.

“Of course, we take any deficiency very seriously, including those associated with the main propulsion system that surfaced after the Noble Discoverer had transited out of the Chukchi Sea. At no time was the Noble Discoverer found or believed to be a danger to people or the environment while drilling in the Chukchi Sea in 2012. Had that been the case, we would have ceased all operations immediately,” he said.

Both the Noble Discoverer and the Kulluk will be taken to Asia for further inspection and repairs.

It wasn’t immediately clear how this will affect the company’s drilling plans in the Arctic.

“We have not made any final decision on 2013 drilling in Alaska. The Kulluk and Noble Discoverer’s return to Alaska will be dictated by the scope of work identified while in dry dock and the timeline associated with that work,” Smith said.

The Noble Discoverer completed preliminary drilling in early October at one well of the Burger-A Prospect 70 miles (112 kilometres) offshore in the Chukchi Sea. It experienced a vibration problem in its propulsion system after leaving the Chukchi Sea, and an inspection in the Aleutian Islands port of Dutch Harbor was inconclusive. The vibration problem increased, Smith said at the time, as the vessel continued to Seward, a Prince William Sound port about 75 miles (120 kilometres) southeast of Anchorage.

Coast Guard Capt. Paul Mehler, the officer in charge of marine inspection for western Alaska, assigned inspectors to the Noble Discoverer when it reached Seward in late November. They found several major issues, which led the Coast Guard to issue a “port stay control detention” for the Liberian-flagged vessel.

After summer exploration in the Beaufort Sea, the Kulluk ran aground on New Year’s Eve near Kodiak Island as it was being towed to Seattle for maintenance and broke free in a storm. It was refloated and taken to a sheltered harbour. Once weather improves, the Kulluk will be towed to Dutch Harbor, then prepared for a dry tow transport to Asia.