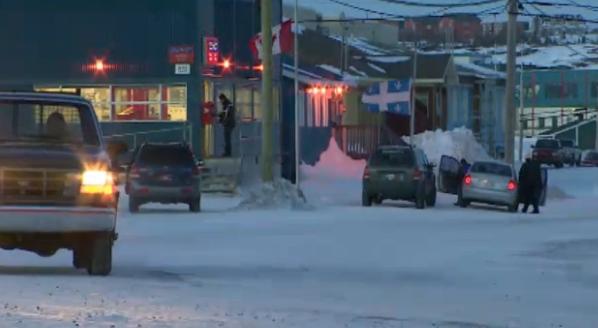 The mayor of Kuujjuaq in northern Quebec says the community is in shock after a shooting incident on Saturday night claimed the life of one police officer and left another one injured.

Steve Dery, 27, an officer with the Kativik Regional Police Force was killed, and another police officer, Joshua Boreland, was injured but is expected to recover.

The officers were responding to a domestic dispute.

After he was shot, Dery was rushed to the local hospital and pronounced dead upon arrival.

Members of the provincial police force were called in to help with the standoff, which lasted 17 hours.

“When the call was initially received there was a woman that was in the dwelling at the time. She managed to escape. She was a victim of conjugal violence so we have to meet with her and take her statement as to what happened,” said Sgt. Daniel Thibodeau, from the Sûreté du Quebec provincial police.

Officers ended up firing a flare into the house, and then members of a tactical squad moved in. There, they found the lifeless body of the alleged shooter, 21-year-old Jobie Saunders Jr.

Police believe the man took his own life and are investigating to determine whether that’s the case.

Mayor Tunnu Napartuq said healing now needs to take place in the community of about 2,500 people.

Napartuq said it’s even more difficult because most Inuit know each other and live in small communities in the Nunavik region. He said mental health officials are available to help people in the community.

“From my experience, this is a wakeup call. I feel that no matter who we are — Inuk or white or civilian or an RCMP officer — we cannot judge others. We can only judge ourselves throughout life. That is what we must do. We will always be faced with difficult times and this is one of them,” said Bobby Snowfall, an elder in Kuujjuaq, who was speaking in Inuktitut.

In Nunavut’s legislative assembly on Monday, Premier Eva Aariak spoke about the tragedy.

“We send our condolences to our fellow people in Nunavik for the tragic event that occurred on Saturday evening. We want you to know we are sending out prayers and love to all the people in Kuujjuaq during this difficult time,” she said.

The investigation is ongoing.