Canada and the United States issued a joint statement on Tuesday barring offshore oil & gas activities in the Arctic.

“Today, President Obama and Prime Minister Trudeau are proud to launch actions ensuring a strong, sustainable and viable Arctic economy and ecosystem, with low-impact shipping, science based management of marine resources, and free from the future risks of offshore oil and gas activity,” the joint statement said.

“Together, these actions set the stage for deeper partnerships with other Arctic nations, including through the Arctic Council.” 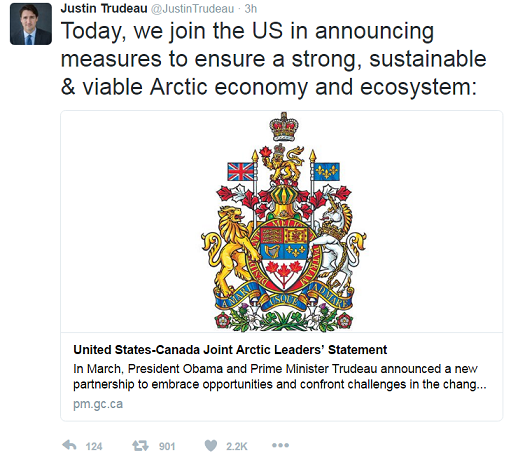 Canada also announced it was scrapping its Northern Strategy in favour of an Arctic Policy Framework to be developed with First Nations, Inuit, and Métis Peoples along with Canada’s territorial and provincial governments.

Canada says it will review the ban every five years, based on climate and scientific assessment.

Meanwhile, the President Barack Obama issued an order indefinitely banning offshore oil and gas leasing in the majority of the Chukchi and Beaufort Seas.

“Today’s announcement is a groundbreaking step for the Arctic, its inhabitants and the planet,”  said Jessica Wilson, head of Greenpeace Canada’s Arctic campaign, in a news statement on Tuesday.

“The science is clear: if Canada is to meet its climate commitments to keep global warming below 2C, and as close as possible to 1.5C, we must leave extreme oil like Arctic oil in the ground. Greenpeace welcomes this moratorium as a significant step towards the government applying a science-based approach to economic development in the Arctic.”

Other environmental groups said the announcement sent an important message to the energy industry.

“Today’s announcement shows an impressive commitment to protect one of our most ecologically sensitive areas,” said David Miller, president and CEO of WWF-Canada.

“We urge industry to see the ban of offshore drilling in the Arctic as an opportunity to invest in habitat-friendly renewable energies to help meet our fuel and energy needs.”

Canada-U.S. on the Arctic

Today’s statement was the second major Trudeau-Obama joint announcement on the Arctic this year.

In March, Trudeau travelled to Washington D.C., where the two leaders announced their commitment to protecting the Arctic environment and their plans to cut emissions.

The move was hailed by Arctic watchers at the time as an important signal on the North’s rising priority on the international stage.

Write to Eilís Quinn (at) eilis.quinn@cbc.ca