Chinese artist-sailor Zhai Mo (翟墨) has just set sail from Shanghai to embark on a four-month journey around the Arctic Ocean. The voyage promoter’s claim that it will be the first non-stop circumpolar navigation.

Eleven years ago, however, Norwegian explorer Børge Ousland sailed around the edge of the Arctic Ocean on his trimaran sailboat within a single summer season. That summer, so, too did Russian sailor Daniel Gavrilov. These two expeditions were the first successful circumnavigations of the North Pole by sailboat, though it does appear that they may have stopped, for the two expeditions encountered each other in the port of Pevek, Russia. (Numerous other sailors have since completed the circumnavigation, including a 73-year old British pensioner in 2011 and, separately, a 14-year old British teenager in 2016. The first tourist vessel circumnavigated the Arctic in 1999.)

A clip from Daniel Gavrilov’s circumnavigation of the North Pole by sailboat in 2010.

Zhai’s trip may well be the first non-stop one. It will also undoubtedly be the first circumnavigation of the North Pole by a Chinese sailor, making it a point of national pride that is cloaked in universalizing rhetoric. His voyage has been touted by Huang Ming, CEO of a Chinese company providing solar energy to provide electricity to the vessels, as “not only a challenging adventure that surpasses the limits of mankind, but also a nautical public welfare trip that calls on people to protect the Arctic natural environment and maintain the marine ecology” [sic]. Seen this way, Zhai’s circumnavigation seems like a standard-issue modern Arctic expedition in which environmentalism, big egos, and big money all intertwine.

Yet Zhai’s voyage is also distinct in that despite being a private expedition, it enjoys the close support of the Chinese state and associated entities. (In contrast, Ousland’s 2010 circumnavigation was sponsored by Google and the Discovery Channel.) Departing on the eve of the 100th anniversary of the founding of the Chinese Communist Party, the landmark voyage is being fêted by state media outlets and Chinese bloggers alike. Huang’s post perfunctorily observed, “This is another feat of the Chinese National People’s Congress.” Zhai’s expedition also has the sponsorship of state-owned enterprises like ChinaMobile, whose fittingly icy blue and white logo adorns the vessel’s sail when it is not flying its crimson red one, and China Ocean Shipping Company (COSCO), which has carried out numerous test voyages along the Northern Sea Route.

Zhai’s previous voyages, among them circumnavigating the planet in 2011-2012 and sailing along a route manifesting China’s plans for a “Maritime Silk Road” as part of the Belt and Road Initiative in 2015, expressed clear geopolitical undertones. The 2011-2012 global circumnavigation, which involved five other sixty-foot sailboats, stopped in dozens of locations, including at China’s Great Wall Station in Antarctica.

The second Maritime Silk Road voyage was even more brazenly political, retracing the voyages taken by Ming Dynasty navigator Zheng He, who set out several times in the early 1400s from Fujian Province aboard shachuan (sandboats that had flat-bottomed hulls to facilitate sailing in shallow coastal waters) to destinations around the Indian Ocean. In 2015, Zhai sailed 10,000 nautical miles from Fujian to Italy via Singapore, Malaysia, Sri Lanka, Seychelles, Egypt, Greece, and Malta. Around the pirate-infested waters of the Gulf of Aden, the Chinese navy (or, one report claims, a private Chinese security firm called HuaxinZhongan Security Service) escorted his ship.

Emphasizing the intertwining of exploration, geopolitics, and culture, Zhai and his team consisting of two other yachts mimicked Zheng He’s trips by keeping on board ancient and modern Chinese ceramics, paintings, and tea, which they used to help spread and promote Chinese culture at museums in the port cities where they docked. Further demonstrating his patriotism, Zhai expressed, “It’s exciting to have our five-star national flag flying over the yacht in the foreign seas. We want to spread our passion toward sailing and unswerving spirit, and share the beautiful moment with other people.”

Keeping the Chinese flag flying high, however, was not enough. During their expedition, when Zhai’s crew passed near the Diaoyu/Senkaku Islands, whose sovereignty China and Japan dispute, with the Chinese Coast Guard supporting them, they dumped 100 Chinese flags into the water. Many were attached to buoys, allowing them to float. Zhai told The Global Times, “Even though we were just a few people on a sailboat, we voiced our opinions to the people of Japan and other countries…We got there and we claimed our sovereignty, which is the most important thing.”

Geopolitical pollution in the form of flag-dumping is unnecessary anywhere. Yet if Mo were to repeat such a stunt in the Arctic, this could be particularly problematic, as the ocean’s cold temperatures mean that waste takes much longer to break down.

Zhai’s circumnavigation raises a key question: Is he making the trip of his own volition or instead due to a decision taken by higher-ups in the Chinese government?

The answer is that Zhai’s voyage lies somewhere in between being a private and state-funded feat. The line between the two has been blurred throughout the history of Arctic exploration, and exploration in general for that matter. The planting of the Russian flag on the seabed below the North Pole in 2008, which attracted a huge degree of controversy, was in fact carried out by a privately-funded expedition. When Zhai was recollecting scattering flags around the Diaoyu/Senkaku Islands, he expressed, “It was rather more of a free and personal voyage,” he said. “A Chinese man who sails for sport can’t make that much trouble. This approach to maintaining sovereignty is a lot more peaceful.” More peaceful, perhaps, than having a Chinese icebreaker suddenly drop flags in the middle of the Arctic Ocean, but no less geopolitical.

In that regard, another question to ask might be whether Zhai’s historic voyage should in fact be seen as a compliment to the first Arctic expedition by China’s new icebreaker, Xue Long 2, which will set sail on July 12 from Shanghai to cross the Arctic ice cap. Notably, someone on board Xue Long 2, currently docked in Shanghai, wrote on their Weibo microblog that they tried to call one of the ships in Zhai’s mini-circumnavigation fleet as it exited the port, but no one answered. “See you at the North Pole” they signed off. (You can follow the micro-blog, complete with photos of pastel-colored sunsets from the icebreaker’s bow and delicious dumplings, here. Things should get more interesting once the icebreaker sets sail in mid-July.) 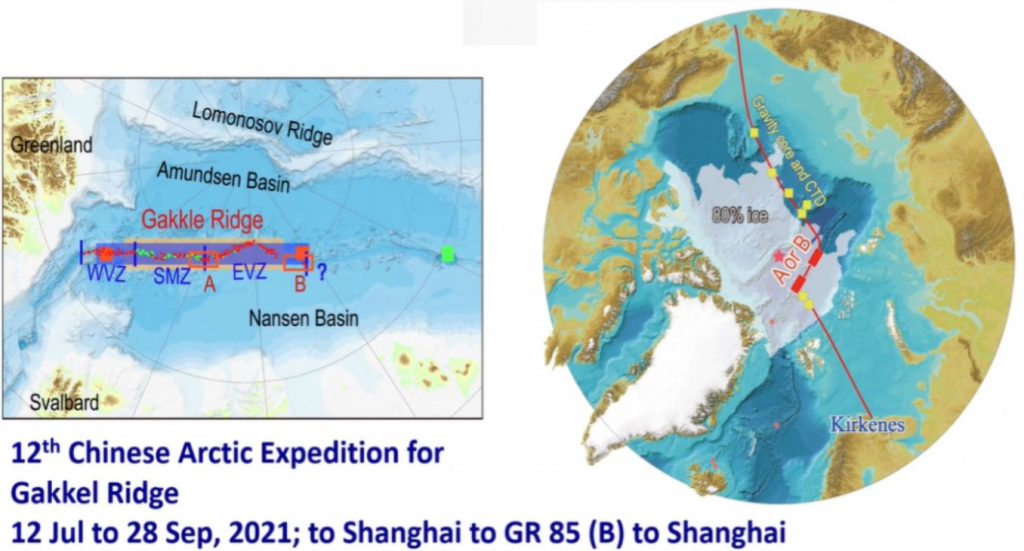 The geopolitical conditions for circumnavigation

Even if geopolitical tensions are rising both within the Arctic and between China and the West, the very possibility of circumnavigating the Arctic Ocean testifies to vastly improved regional relations since the Cold War. In 1980, Sweden proposed to send its icebreaker, Ymer, to carry out what would have been the first circumnavigation of the Arctic Ocean. The voyage would have also commemorated the first circumnavigation in 1897 of Europe and Asia by Swedish explorer Adolf Erik Nordensköld. The Soviets, however, blocked the voyage due to security concerns over the Northeast Passage. (Indeed, these were much the same sensitivities that drove the Soviets to block international flights from passing through Soviet airspace until 1985, which is why flights between North America and Asia had to go through Alaska or the Middle East.)

A brief report in Nature from 1980 explains of the Swedes’ efforts: “Permission was asked of the Russian authorities to sail along the Siberian coast and to take sediment cores from the continental shelf there. Although the Swedish Prime Minister Falldin took up the matter with Mr Kosygin [then Premier of the USSR], the Russians never replied. Reconciling themselves to Russian views about the strategic importance of the area, the Swedes changed their route.” They ended up sticking much closer to Svalbard, and consequently could not gather as much scientific data as they had hoped.

Now, a Chinese sailor is about to circumnavigate the Arctic Ocean in a sailboat, and the Russians do not seem to be the least bit perturbed. Not only, then, are melting sea ice and a rising China responsible for what may well be the first non-stop circumnavigation of the Arctic by sailboat: so, too, is the happy fact that the Arctic Ocean is a much more cooperative and open space than it was four decades ago. Let’s hope it stays that way.

Finland: An optimistic picture for Finland’s economy in 2018, The Independent Barents Observer

One thought on “Blog – A Chinese sailboat is circumnavigating the Arctic”