For most Canadians, the story of the Klondike Gold Rush is a romantic tale of hardscrabble stampeders pouring into a remote section of Canada’s North to find adventure, hardship, and — occasionally — fortune.

But there’s another side to that coin, and the Canadian Mint has aimed to show it.

A new commemorative one-dollar coin has been designed to tell the story of the Gold Rush, incorporating the perspectives of the local Indigenous communities.

“It became apparent, you know, quickly apparent, that there was more to the story than we originally thought. And obviously, we had to talk to the Indigenous communities that were involved,” said Alex Reeves of the Royal Canadian Mint.

Reeves said the original idea was to mark the 125th anniversary of the 1896 discovery of gold on Bonanza Creek in the Klondike. It made sense to use the gold-coloured dollar coin, Reeves said.

Officials with the Mint began by talking to the Dawson City Museum and Parks Canada, and that led to further conversations with the Carcross/Tagish and Tr’ondëk Hwëch’in First Nations.

“We had a really eye-opening conversation about the impact on those Indigenous communities and how the Gold Rush disrupted the traditional ways of life, the environment. And it really made us think, well, you know, that’s a huge missing piece,” Reeves said.

Also included is an image on a hillside representing the Moosehide gathering place, where many Tr’ondëk Hwëch’in people relocated as the stampeders poured into Dawson City. On some of the commemorative coins, the Moosehide site is coloured bright red.

“We rarely add paint to a one-dollar coin. We’ve painted lots of toonies in the past and some some quarters as well, but it’s a really nice touch on the coin, which, you know, was an addition that was suggested by the Tr’ondëk Hwëch’in First Nation,” he said.

“Enough people are going to ask themselves, like, ‘what is that doing there and what does it mean?’ And it will encourage people, inspire them to find out more about it.” 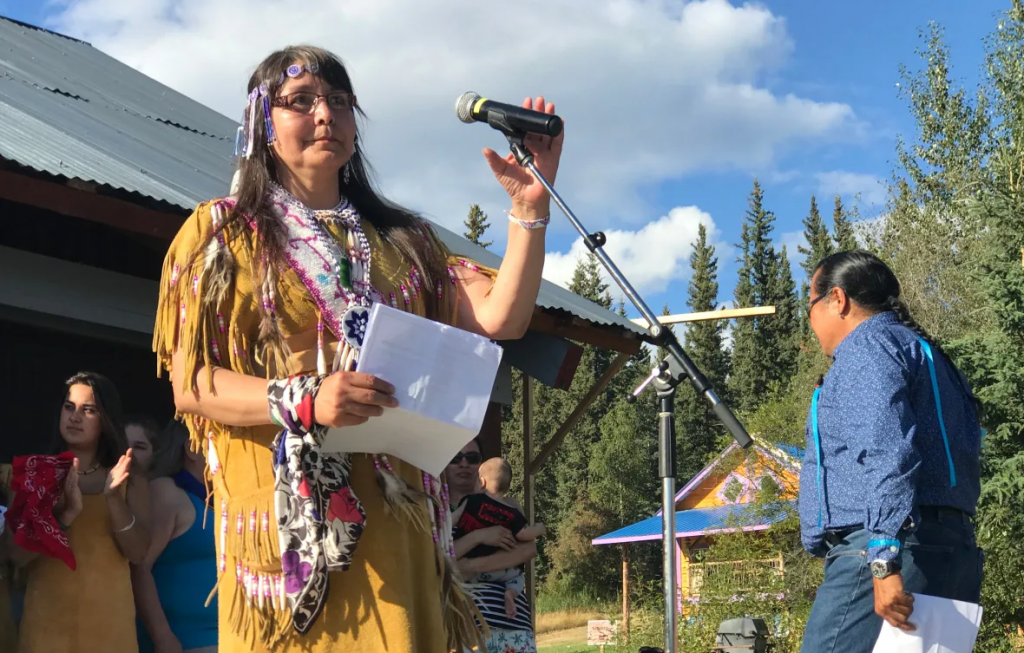 “With it came more than a century of challenges for our First Nation. With the vision and foresight of our past leader, Chief Isaac, we were able to survive the decades of upheaval,” she said.

“Today, we are proud to be a self-governing, First Nation government and leaders in our community and territory.”

The line drawing was designed by Vancouver artist Jori van der Linde. Along with the four prospecting figures and the Moosehide icon, the image includes a maple leaf shining overhead, meant to represent the midnight sun.

Reeves called the Klondike region “a national treasure,” and he hopes the new coin prompts Canadians to learn more about the region’s history and people.

“Everybody feels it’s high time the story of the Klondike is better understood,” Reeves said.

“Commemoration is not always necessarily a celebration. It’s an opportunity to reflect and think about a subject, and that’s what we’re trying to do with this coin, by telling a more inclusive and complete and shared history of the Klondike Gold Rush.”

-With files from Leonard Linklater

Canada: 2021 Cape Dorset Print Collection to be released internationally on October 16, Eye on the Arctic

Finland: How not to promote Arctic tourism: Why Finland’s Sami say marketing their region needs to change, Eye on the Arctic