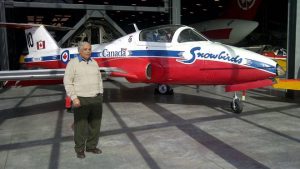 Walter Peters was a pioneer. He was this country’s first Canadian-born black jet fighter pilot, and helped to establish the premier aerial aerobatic performance team, the Royal Canadian Air Force Snowbirds. He was a flight instructor and also flew with the Snowbirds.

At age 24 he had enlisted in the RCAF and retired with the rank of Major, and from all accounts had an excellent record.

Mr Peters died in Ottawa on Sunday, February 24th; following complications from a stroke. He was 76.

A relative, Juanita Peters, said he was a gentle man, He spoke at a conference in 2011 and said he’d faced many challenges in his life but overcame them with hard work, perseverance, and education.

Mr Peters was deployed on several missions around the world, and also provided advice on tactical troop movement by air, and other issues to the UN Secretary-General and the Security Council.

A memorial service will be held this weekend in the national capital.
(MM)