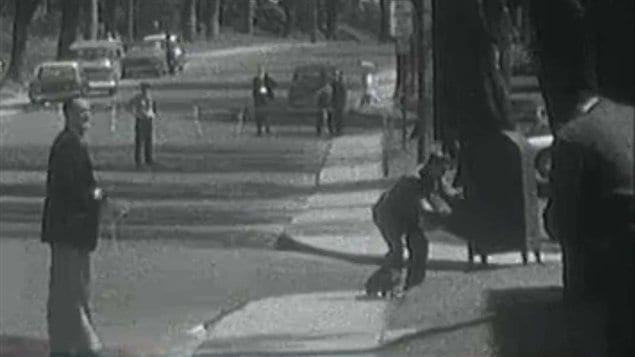 May 17, 1963, Walter Leja tries to disarm a terrorist bomb in Montreal, seconds later the FLQ bomb would go off leaving him permanently maimed and disabled.
Photo Credit: CBC

It was 50 years ago, May 17 1963, that Walter Leja was severely and permanently maimed while trying to dismantle a terrorist bomb in Montreal.

Several bombs had been planted in mailboxes throughout the Westmount area of Montreal by the Front de Liberation du Quebec (FLQ).  This was a radical far-left group seeking the separation of Quebec from Canada and the establishment of an independent and socialist French speaking country,

They left bombs in mailboxes which they perceived as a symbol of the Canadian government and targeted Westmount as it was an Anglophone area.

Six bombs go off starting at 3 AM, five more are carried away and blown up safely, five are disarmed.

Walter Leja was an army engineer Sergeant-Major and had safely disarmed two bombs that day, when the third blew up in his face.  He lost most of his left arm, suffered several facial and chest injury along with permanent brain damage. He was paralysed on his right side and lost the ability to speak.

Several members of the FLQ were arrested and one man jailed for planting bombs. However, other cells of the FLQ would continue violent terrorist bombings and robberies including bombing the Montreal stock exchange which injured 27,  a bombing in Ottawa that killed a cleaning lady, and an attack on a military armoury that killed a watchman. The FLQ activity culminated in the kidnapping of British diplomat James Cross and kidnapping and murder of Quebec Labour minister Pierre Laporte which led to the so-called October Crisis of 1970 when the Canadian Army was called in to quell terrorist activity. Subsequently, violent separatist action ended, and the francophone Quebec separatist movement continues through political means.

A small brass plaque has since been installed at the corner where Walter Leja sustained his injuries to commemorate his bravery. Mr Leja died in 1992