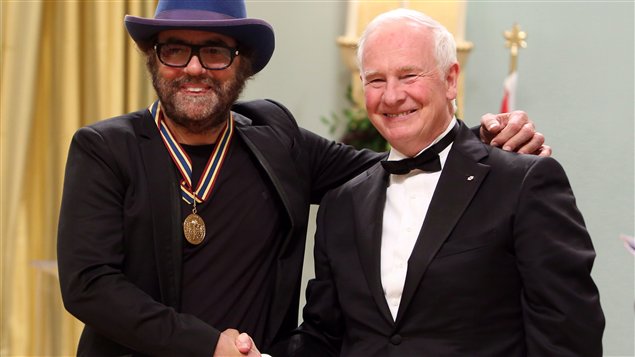 It was a trip down memory lane for music producer Daniel Lanois.  He and his mother, drove the four hours from his home in Toronto, to Ottawa.  It was on the other side of the river, in Gatineau Quebec, that Daniel Lanois spent his childhood until the age of 9.  The family then moved to southern Ontario, and by 17 he was already at work in the basement studio he built with his brother Bob.

Last Friday Daniel Lanois was at the Governor General’s residence in Ottawa, to receive his “Lifetime Artistic Achievement” award, one of the highest honors in Canada.  A musician himself, Lanois is best-known for recording other artists work.  Beginning with Brian Eno, whom he describes as a mentor, Lanois has been part of the success of Peter Gabriel, and U2 and worked with legends Bob Dylan and fellow-Canadian, Neil Young.

In an interview in the Globe and Mail newspaper over the weekend, Daniel Lanois said he likes what he’s heard of U2’s latest album, being produced by Danger Mouse.  Lanois said, “You really have to be physically fit to make a U2 record. But, really, they’re all hard. All records are hard to make.”