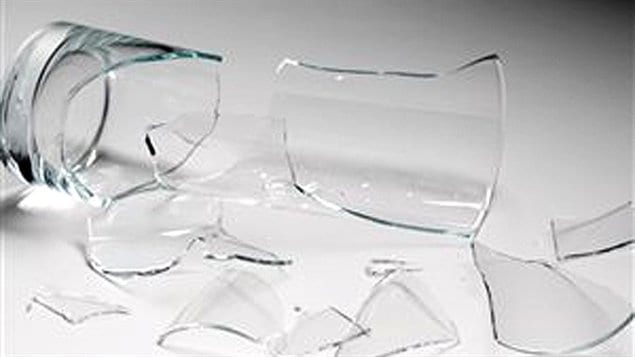 MrGill research inspired by nature, showed that by etching microcracks into glass, you can make it 200 times more resistant to impacts
Photo Credit: Radio-Canada

Could it mean the end of cleaning up broken glasses and windows?

A research team at McGill University in Montreal has developed a new technique which could mean that when you knock over a glass, it might only suffer a slight dent..

Francois Barthelat is an associate Professor in Department of Mechanical Engineering.

Professor Barthelat operates the Biomimetic Materials Laboratory (bio-mimicry) which seeks to find out how nature has solved certain structural or functional problems and use that as the basis to engineer better man-made materials.

Mollusc shells for example are extremely resistant to impact in spite of being made of brittle materials.

In studying the strength of shells they found that to protect the brittle shell from breaking on impact, in the mother of pearl (Nacre) lining of the shells, nature had created a complex system of calcium and proteins to diffuse the impact energy to prevent cracking.

It consists of microscopic tablets-like miniature brick wall. An impact is diffused and absorbed along the weaker boundaries of the individual bricks/tablets. These millions of weak “interfaces” diffuse impacts

Professor Barthelat and team sought to recreate these weak boundaries in a man-made material, choosing glass which is strong but brittle, and using microscope slides for their material.

Using lasers they etched a network of 3D microcracks in the glass.

After developing a very particular pattern –similar to the way jigsaw puzzles interlock- they were able to recreate flexibility through these micro-cracks or interfaces in the glass slide.

In testing they found that the glass was now about 200 times more resistant to breaking from impact than a regular glass slide.

This meant that an impact would deform it slightly (bend/dent) but not break it as would be the case with a non-etched piece of glass which remained brittle.

While the research was for theoretical purposes, Professor Barthelat says there may be vast possibilities for the concept in many different materials and in different applications to create flexibility and energy absorption from impacts in previously brittle materials.

The research was funded by the Natural Sciences and Engineering Research Council of Canada (NSERC) and the Canada Foundation for Innovation (CFI), with partial support for one of the authors from a McGill Engineering Doctoral Award. The authors acknowledge useful technical advice by the company Vitro.