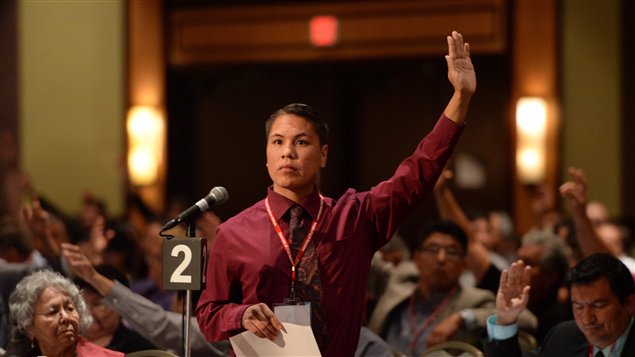 Matthew Louie of Cowichan Tribes, in the province of British Columbia, votes as First Nations leaders, elders, youth and delegates gather for the Assembly of First Nations Special Chiefs Assembly in Ottawa on Tuesday, May 27, 2014.
Photo Credit: /Sean Kilpatrick/CP

A special meeting of First Nation Indigenous chiefs on Tuesday (May 27) will decide on the timing and location for an election to replace Shawn Atleo, who resigned as National Chief of the Assembly of First Nations earlier this month, and discuss the issue that led to his resignation, a federal government bill to reform Indigenous education.

Chiefs from several provinces want Ottawa to scrap the First Nations Control of First Nations Education Act (FNEA), saying it has failed to meet conditions set out by Indigenous leaders.

The Canadian government said the goal of the legislation was to hand over more control of Indigenous education to First Nations, but that’s disputed by those against the reforms.