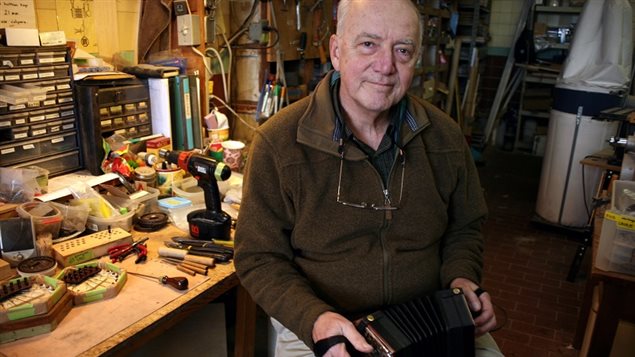 Frank Edgley in his Windsor Ontario workshop holding one of his handcrafted Concertinas- Made in Canada
Photo Credit: Gwen Edgley

Thanks to a Canadian, an old instrument is making a comeback in popularity.

Well over a century ago, the Concertina, more commonly known as a “squeeze-box” was a widely popular instrument, but over time faded almost into obscurity by the 1960’s.

Frank Edgley, a now retired school teacher, was a top notch highland bagpipe player with 17 years of playing. Then  feeling he wanted to play an instrument with more than nine notes, became interested in the concertina, but after playing, and breaking, a cheap one, discovered that good ones were very hard to find.

After spending some time repairing an antique concertina he had purchased at an auction, others heard of his work and began sending him theirs for repair.

He started out with a workshop in a small backyard shed.

With many more years of repairs on the instruments to understand all the previous manufacturers advantages and lapses in design and construction, he began making his own.

As word got around about his instruments he moved into a much larger rented space in an old factory.

Although his output is still fairly small, being handmade, the quality of the work by the Windsor, Ontario, resident and the employees has now become recognized worldwide.

I hope you enjoy this encoer conversation with Frank Edgley, Canadian concertina maker.