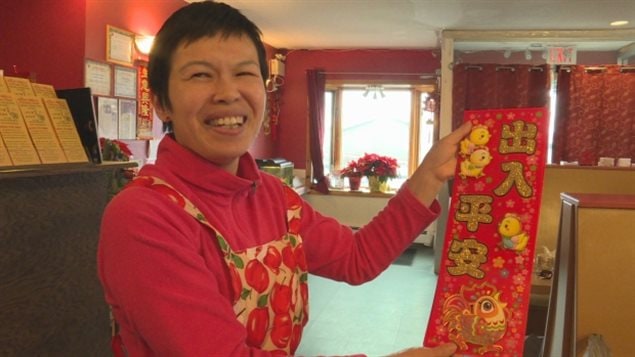 Anna Zeng, owner of King's BBQ Chinese Food in Charlottetown, Prince Edward Island, hangs symbols around her restaurant for the Chinese, or Lunar New Year. This one represents safety for travellers on the road.
Photo Credit: CBC / Nicole Williams

The Year of the Rooster, a great year to travel

This weekend the lunar new year will be celebrated in many parts of the world, and by several different cultures in Canada.

According to the Chinese zodiac we are entering the Year of the Rooster, a Fire Rooster, the first such combination since 1957.

‘This is the year for change”

Sherman Tai is a master of the Chinese zodiac and a practitioner of Feng Shui in the Vancouver area of British Columbia. He was the first Feng Shui master invited by the Olympic committee to consult on the Olympics. He was involved in the design of the Olympic Oval for Vancouver’s 2010 Winter Olympics.

He says this coming year will be full of changes. I spoke with him yesterday to find out more about what this year holds in store.

A rooster year is great year for travel, and opportunity for some, but not a very harmonic year. The rooster is stubborn, and it might be a year of fights. “This is the year for change”, he says.

If you’re a business owner, Tai counsels you to be more flexible. He says you need to listen to others before making final decisions. If you’re working for yourself, however, it is a year of great opportunity to diversify and branch out.

Tai says the first six months of the year will go well, but the second half will hold challenges and instability, from turmoil on the stock market, to the possibility of a terrorist attack somewhere in the west.

For an employee, or a blue collar worker, this will be good year to make a change, to apply for something better.

Geographically, Tai says north is not a good position this year, nor is west or south east… try to avoid sleeping or sitting in these directions.

Sherman Tai will take his own counsel and travel more this year, and advises everyone to do the same. Whether it’s for business, holiday or fun, the experience will bring great opportunities.