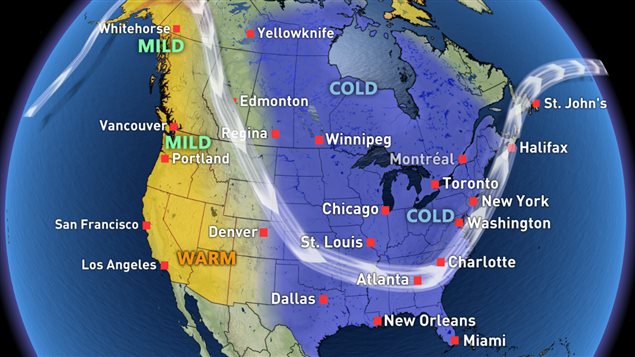 There goes the jet stream: the outlook for the second and third week of December.
Photo Credit: The Weather Network

Arctic weather on the way

The last mild spell of the autumn is underway in eastern Canada, and people have been advised to make the most of it.

Meteorologists and weather specialists are talking about the big dip in the jet stream that will bring plunging temperatures to much of eastern and central north America.

It makes for a dramatic image on weather maps, and we are moving into December after all.

Dr. Doug Gillham, of the Weather Network writes that the beginning of December will continue mild with “a flat (zonal) Jet Stream pattern”.

He says this will keep the Arctic air well to the north and allow Pacific air to flood across the country.

But the second week of December has those images that may bring back memories of what we came to know as the “Polar Vortex”.

The snowfall that’s expected in these conditions will “allow ski areas in Ontario and Quebec to build large bases heading into the Holiday season,” according to Dr. Gillham.