Clyde River (Kanngiqtugaapik), Nunavut – Morning -Today, producer Levon, cameraman Luc, soundman Jean and myself, went on a seal hunt with a group of local hunters headed up by Elijah Palituq.

We left at 8:30am. It became quite the production. 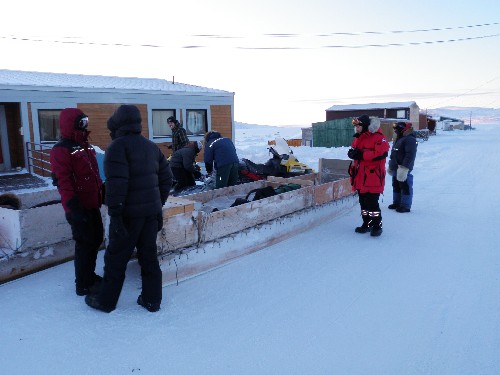 Jean and Luc rode with the equipment in one qamutik. Levon and I rode in the other.

Qamutiks are the wooden sleds Inuit use to haul their gear around by dog team or snowmobile. There’s no shock absorbers. Riding in them can get very, very bumpy, especially if you’re going up or down hills or over jagged sea ice.

Here’s what the ride was like for me and Levon:

Levon and me in komatik near Clyde River.

After 45 minutes, we stopped at a camp. There were a handful of wooden cabins with heaters inside. Everybody got off the snowmobiles and out of the komatiks. I went into one of the cabins with Joe, a 14-year old from our group. 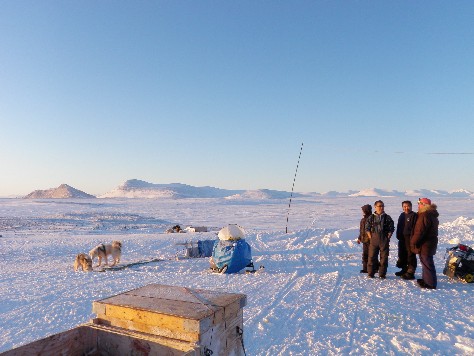 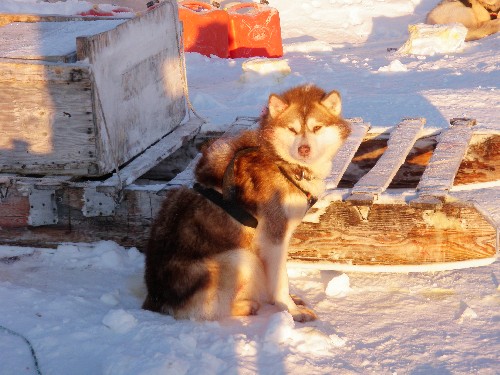 Joe was a very articulate and animated kid. As we drank hot water together out of plastic cups, he told me how he likes being out on the land “a million times better” than watching TV, that he wants to be a caribou hunter when he grows up and that he’s learning to drive his own dog team.

He said he’s already really good at hunting seal, caribou and polar bear. But that he still has a lot to learn about reading the environment and surviving out on the land on his own.

He said that he loves learning what he called ‘country skills’ but that he didn’t like it when he was out with elders and they yelled at him because he wasn’t doing something right.