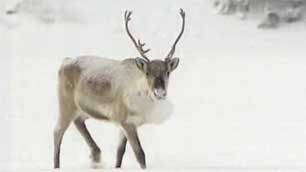 A plan to manage the declining Bathurst caribou herd in Canada’s Northwest Territories may be one step closer to becoming a reality, after a wildlife review board has weighed in on the proposal.

The Wek’eezhii Renewable Resources Board has agreed with a proposal by the Northwest Territory and Tlicho Dene governments to establish an aboriginal “harvest target” of 300 Bathurst caribou each year, starting this hunting season and running until 2012-13.

The recommendation on the harvest target for the Bathurst herd is one of a number of recommendations in a report released late Friday.

The reported decline prompted the N.W.T. government to impose an emergency ban on hunting caribou from the Bathurst herd’s winter grounds, in a large area north of Great Slave Lake, until a management plan is in place. The ban began Jan. 1 and remains in effect for the time being.

The Wek’eezhii board, which is involved in managing the Bathurst caribou herd and other wildlife species in the N.W.T.’s Tlicho region, said in its report that its recommendations “have been structured to have the least impact on caribou users and the greatest benefit to caribou that we can provide at this time.”

The matter now goes back to the N.W.T. and Tlicho governments, which must discuss if and how it will finalize and implement the management plan.

The board accepted the governments’ joint proposal to set a harvest target over an absolute hunting quota, also known as a total allowable harvest.

“Both governments proposed that because the herd size is an estimate and not an exact number, it is not beneficial to have an exact number set for harvest,” the board’s report states in part.

As well, the report noted the governments’ argument that Tlicho hunters would more likely support and take ownership of a harvest target rather than a strict quota.

“With a target, what it does is that it gives the co-management to the aboriginal groups to ensure that the targets that are set are adhered to or they’re going to keep to those by helping each other,” John B. Zoe, a senior adviser with the Tlicho government, told CBC News on Monday.

“Generally, the total allowable harvest just means that the authorities — like the government of the Northwest Territories, who has the authority — would be the one that enforces that.”

The board has recommended that both the N.W.T. and Tlicho governments provide an annual report on how well the harvest target approach is doing in “meeting the objectives of effective collaborative management and long-term recovery of the Bathurst caribou herd.”

While the harvest target applies to aboriginal hunters, the Wek’eezhii board has recommended not allowing the commercial harvest of the Bathurst caribou herd, as well as big-game sport hunts that are arranged by hunting outfitters.

Outfitters who organized Bathurst caribou hunts have argued that the current emergency ban has adversely affected their businesses, as would any further restrictions.

In its report, the board said while it recognizes the economic hardship caribou hunting outfitters have faced, it must give priority to the aboriginal harvesting of caribou.

“The board is responsible for ensuring a balance that maintains Tlicho and Yellowknives Dene First Nation traditions and ensuring conservation,” the board’s report stated.

Prior to releasing the report, the Wek’eezhii board held public hearings on the governments’ joint plan in Behchoko, N.W.T., in March and in August.

Even split between aboriginal groups

According to the report itself, of the 300 harvest target agreed to by the board, 225 would be allotted to the Tlicho Dene people and the remaining 75 would go to other aboriginal groups.

However, the board acknowledged that it has not taken into account an interim agreement signed last week between the N.W.T. government and the Yellowknives Dene First Nation, allowing that First Nation’s hunters to harvest 150 Bathurst caribou a year over the next two years.

Zoe said last week’s agreement simply means the harvest target will be split evenly between the Tlicho and the Yellowknives Dene, with each group working with a 150-caribou target.

“It’s in line with the proposal before it went in,” Zoe said.

“The agreement that the Yellowknives had signed with [the Environment and Natural Resources Department] is within the range,” he added.

While the board has recommended limiting the Bathurst caribou hunt, it is proposing an aboriginal harvest target of 2,800 caribou from another herd, the Bluenose East herd, each year until 2012-13.

However, the board said the harvest target for the Bluenose East herd should be worked out between the wildlife co-management boards and aboriginal governments in the N.W.T.’s Tlicho, Sahtu and Dehcho regions.

The board noted a bit of growth in the Bluenose East herd, from 66,700 in 2006 to a preliminary estimate of 80,000 this year. Still, the board urged caution in terms of how much of that herd should be harvested.