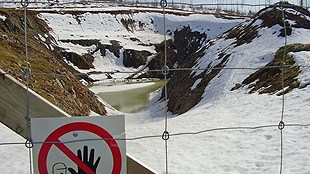 The establishment of a new mine in Pajala in northern Sweden is a cause of anxiety for local reindeer herders. Transporting the iron ore can cause problems for the Sámi herders whose reindeer graze in the areas through which the ore will be hauled.

‘One must wonder if it is really profitable to transport [ore] in trucks on bad roads which can be made even worse by this activity,’ says Tomas Sevä, chairman of the Muonio Sámi reindeer herding community.

At the end of September it became clear that Narvik in northern Norway will be the shipping port for the new mine in Pajala. This means that the ore will be transported by truck along the road from Pajala to Svappavaara from where it will be conveyed by train. A previously considered alternative was the shipping port in Kemi, in northern Finland.

The Muonio Sámi community uses the area the trucks will cross as summer pasture for their reindeer. The villagers fear that increased traffic will mean increased trafficrelated reindeer deaths and also that the heavy trucks will destroy their roads. Tomas Sevä wants a discussion about alternatives with as few negative effects on reindeer husbandry as possible. Gunhild Mangi, chairwoman of the Vittangi Sámi herding community is more split over the issue since Vittangi is not particularly affected except with regard to damaged roads, and she sees the increased employment for the villages as positive. It is worse for the Gabna Same village, which will be affected during the winter. Gabna’s chairman Lars Eric Kuhmunen fears that the trucks carrying iron ore will hit many reindeer since the road between Pajala and Svappavaara passes through their winter grazing land.

In an effort to solve the problem, the mining company, Northland Resources, is considering an application to the Swedish Transport Administration for permission to use longer and more heavily loaded trucks.

‘An empty truck kills a reindeer as effectively as a full one, and a reduced number of trucks is clearly desirable’, says Jonas Lundström, communication director of the mining company. However, ‘When it is a matter of “divisible goods” it is difficult and rare to get a dispensation’, observes Lars Svensson, head of the Transport Dispensation section at the Swedish Transport Administration.