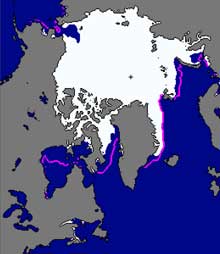 A lack of sea ice in parts of Canada’s eastern Arctic is contributing to unusually mild temperatures in Nunavut, according to scientists.

In recent months, the weather in many parts of Nunavut has been 10 to 12 degrees above the –20 and –30 C temperatures that are normal at this time of year.

Light rain fell in Iqaluit, the territorial capital, as the daytime temperature hovered around 0 C on Monday. Environment Canada declared 2010 to be the warmest year on record there.

In a rare sight for this time of year, Frobisher Bay has not yet frozen over entirely. Likewise, there is a lack of sea ice in parts of Hudson Bay, Davis Strait and other Arctic waterways.

Satellite images are showing a big change in the sea ice cover in the eastern Arctic, according to the U.S. National Snow and Ice Data Center in Boulder, Colorado.

Director Mark Serreze said an unusual high-pressure system that is lingering over the eastern Arctic is driving temperatures up and preventing some bodies of water from freezing.

But Serreze said the lack of Arctic sea ice is causing a “feedback cycle” that is contributing to the warming conditions as well.

“Now you’ve got all this open water where you usually don’t have it, and that pumps heat into the atmosphere,” he told CBC News. “So it’s kind of a double whammy you’ve got working on there right now.”

According to the National Snow and Ice Data Center, nearly half of Hudson Bay would have been frozen over by the end of November. But by Nov. 30, only 17 per cent of the bay had sea ice on it.

Wayne Davidson, a weather researcher based in Resolute Bay, Nunavut, agreed that tracts of open water or thin ice are contributing to the current warming state.

“It is a factor of all this open water that is lingering well into the dark season,” Davidson said.

“As there is less thick ice … there is more heat transferred from the sea — the Arctic Ocean and so on, and Hudson Bay and so on — to the air and it makes every place warmer,” he added.

Serreze said the Arctic sea ice is already close to a record low for this time of year, and warned that similar conditions could be in store in later years.

“You may be seeing a little bit of a hint of what the future holds in store for you,” he said.

Changes to the Arctic sea ice are not only affecting the weather, but also posing challenges to the northern wildlife and people who have lived on or near the ice, said Nunavut Environment Minister Daniel Shewchuk.

“It’s going to put on our plate challenges that we have to look at into the future and deal with these kind of things,” Shewchuk said.

Shewchuk said northern Canada needs more resources to deal with the changing Arctic environment and its impacts on communities.