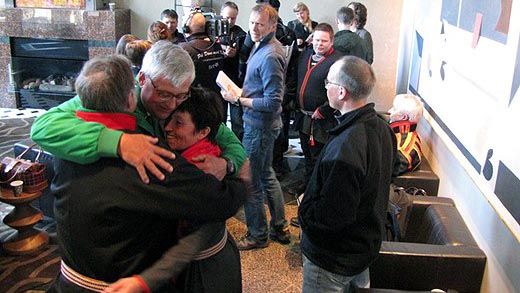 The Swedish Supreme Court has upheld the lower courts, in a landmark decision that recognizes the rights of Sweden’s indigenous population and their reindeer herding.

The case has been before the courts here for 14 years. In 1997, 104 landowners in the northern province of Västerbotten sued three reindeer herding collectives owned by indigenous Sami, or Lapp, people in the area. They charged that reindeer grazing was causing major damage to their land and forests, and protested that the Samis’ traditional rights in the area were not legal.

The Samis argued that they had been herding there for countless generations, and before the Swedes had moved into the north. Both a district court and an appeals court agreed with the Samis, and the case finally ended up in the Swedish Supreme Court.

Olle Larsson, one of the reindeer herders, expressed his relief to Swedish Radio News:

“This feels incredibly good,” he says. “It’s a great relief to know that we can continue to graze our reindeer in the future.”

The court’s decision creates a precedent for indigenous rights, and will be studied closely. The Samis’ lawyer Camilla Wiklund:

“This sets the conditions for the future,” she tells Swedish Radio News. This will put a stop to similar cases farther north, and we hope it will also apply farther south, where we have had problems before.”