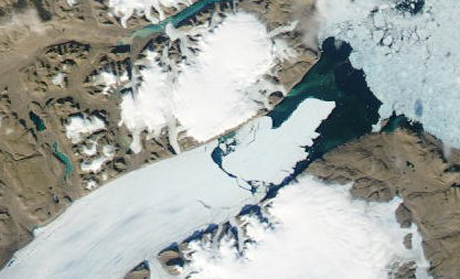 A massive iceberg, originally about 250 square kilometres, that broke off a Greenland glacier last August is near northern Labrador, according to the Canadian Coast Guard.

The drifting ice island that broke off the Petermann Glacier on Aug. 5 moved into Canadian waters this spring.

“Last week it was up off the southern portion of the Baffin Island and across the Hudson Strait. So we’re starting to see it now on the northern portion of Labrador,” the coast guard’s superintendent of ice operations, Dan Frampton, told CBC News on Thursday morning.

He said it’s difficult to say what will happen to the large iceberg that’s estimated to be twice the size of many of the islands scattered around the the coasts of Newfoundland and Labrador.

This NASA map shows the location of Greenland’s Petermann Glacier. Courtesy NASA”How far south it comes and how close it comes into the coast of Labrador remains to be seen…. It could break up [near Labrador] as a result of sea action and islands and so on,” said Frampton.

“It will be interesting to see how much is left by the time it gets to Newfoundland.”

He said that despite the large Greenland iceberg, it’s expected to be a less-than-average year for iceberg watching around the province.