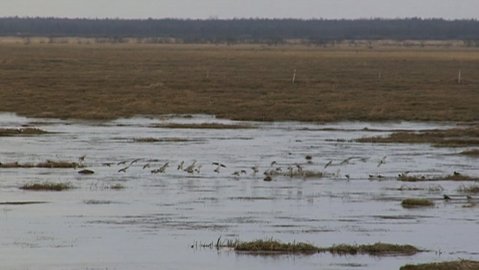 Many water birds have delayed their autumn migration as mild weather continues to keep Finland’s lakes and rivers unfrozen.

New research shows that climate change has been pushing autumn migration later into the year since the 1980s.

This autumn the weather is particularly warm. In Finland’s Arctic province of Lapland, it’s been 50 years since winter has arrived so late.

Tufted ducks and greylag geese now leave Finland nearly a month later than they used to.

Typically water birds begin their migration in September, but this year some species are expected to remain until December.

“It has been exceptionally mild for some time, and that definitely shows in water birds’ migration patterns,” said Aleksi Lehikoinen of the Finnish Museum of Natural History in Helsinki. “Most waterways in Finland are still without ice cover, and that encourages water birds to delay their migrations.”

European wigeon and smew are still visible on Finnish waterways, for example, despite their habit of leaving for warmer climes once Finland gets a taste of winter.

Research completed by the Museum of Natural History and the Aronia Institute shows that several species of water birds have quietly altered their autumn migrations over the last 30 years.

The research timed the migration of 15 water bird species from Hanko bird station, an observation centre run by Tringa, the Uusimaa Ornithologists Association.

“Water birds react to changes in their living conditions,” explained Lehikoinen. “If there is sufficient nutrition and it isn’t too cold, birds stay further north than usual, or remain in Finland a little longer.”

The research shows important changes that should not go unnoticed, according to Lehikoinen.

“Certainly, in my opinion it seems that really rapid and profound changes are occurring in their habitat,” said Lehikoinen. “Some species react to the changes, but we have a large group of species that won’t necessarily react so quickly. It makes you think about those issues.”