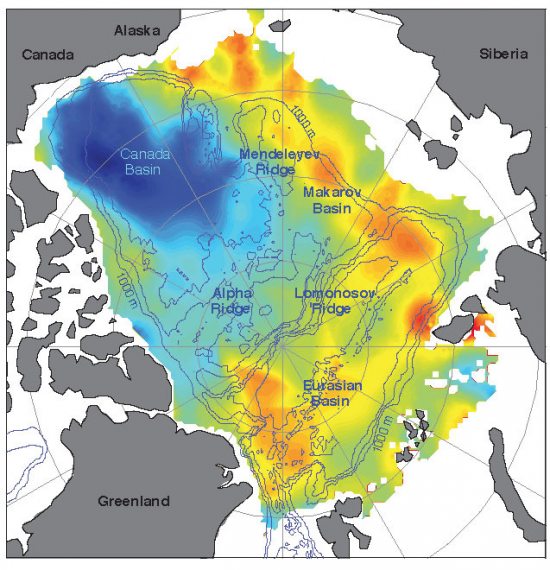 Fresh water sloshing into the polar sea from the great rivers of Russia has been collecting on the Alaskan and Canadian side of the Arctic, adding the equivalent of 10 feet of freshwater to the central Beaufort Sea between 2003 and 2008, according to a new study published this month in Nature.

The ocean northeast of Alaska is now the freshest it’s been in 50 years, the scientists said, but only a tiny proportion of that can be blamed on ice melt. Most of it can be traced to Eurasian river runoff, following a previously undetected pathway from one side of the world to the other.

“A hemisphere-wide phenomenon — and not just regional forces — has caused record-breaking amounts of freshwater to accumulate in the Arctic’s Beaufort Sea,” wrote Sandra Hines of the University of Washington.

This eastward redistribution of river runoff was likely caused by the strong counterclockwise circulation in the atmosphere, triggered by the climatic pattern known as the Arctic Oscillation, explained a different story about the study posted online by NASA. Years of cyclonic flow worked to sweep the fresher water along the Siberian coast toward North America.

“We discovered a pathway that allows Russian river runoff to feed the Beaufort gyre,” said co-author Ron Kwok, a senior research scientist at NASA’s Jet Propulsion Laboratory. “The Beaufort High is important, but so are the hemispheric-scale effects of the Arctic Oscillation.”

One important finding: the total amount of freshwater has not been increasing overall across the Arctic and therefore isn’t threatening to trigger the sort of climate catastrophe portrayed in the pulp movie “The Day After Tomorrow.” The 2004 flick dramatized the overnight return of ice age conditions, something considered scientifically preposterous if not wholly impossible. Yet the underlying process is real.

A dramatic increase in the amount of freshwater entering the North Atlantic from the Arctic could slow the global “ocean conveyor belt” that redistributes heat around the home planet and could conceivably chill down Europe by interfering with the Gulf Stream.

But the team led by oceanographer Jamie Morison at the Applied Physics Laboratory of the University of Washington found no change in the net amount of freshwater now in the Arctic — and nothing that might signal a change in the conveyor belt, the NASA story said.

“Knowing the pathways of freshwater in the upper ocean is important to understanding global climate because of freshwater’s role in protecting sea ice – it can help create a barrier between the ice and warmer ocean water below – and its role in global ocean circulation,” Morrison explained. “Too much freshwater exiting the Arctic would inhibit the interplay of cold water from the poles and warm water from the tropics.”

The study married basic oceanography to rocket science, with Morison and his six co-authors collecting water samples in the field and then using the NASA satellites ICESat and GRACE to analyze oceanographic conditions across thousands of miles. They were the first to draw the connection between the Arctic fresh water circulation and the Arctic Oscillation.

“To me it’s pretty spectacular that you have these satellites zipping around hundreds of kilometers above the Earth and they give us a number about salinity that’s very close to what we get from lowering little sampling bottles into the ocean,” Morison said in the UW story.

For links to a video, photos, other stories and technical background, check out this snazzy web portal about the research, posted by the UW’s Applied Physics lab. The research has also drawn extensive media coverage around the web.