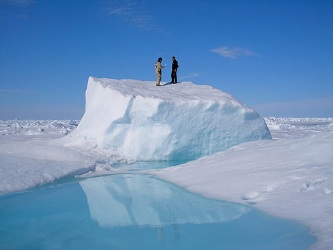 If an ice floe disintegrates off Barrow in September, will 29 inches of snow whomp Great Kills in New York state come December? Will a blizzard strike Dublin, Ireland, in November?

In what might seem to be a climate-change paradox, recent Arctic warming may be causing more brutal winters in locales far removed from the polar sea, according to a new study led by scientists at the Georgia Institute of Technology.

These findings, published online in the journal Proceedings of the National Academy of Sciences, suggest that the Arctic’s summer meltdown has the climactic power to reach across months of time to wallop people living thousands of miles south with blizzards and snow-clogged roads.

To make the connection, the scientists examined sea ice fluctuations and winter weather data over the past 30 years.

“The results of this study add to an increasing body of … evidence that indicates diminishing Arctic sea ice plays a critical role in driving recent cold and snowy winters over large parts of North America, Europe, and east Asia,” wrote the five co-authors, from Georgia Tech, Columbia University and the Chinese Academy of Science, in the paper.

“We think the recent snowy winters could be caused by the retreating Arctic ice altering atmospheric circulation patterns by weakening westerly winds, increasing the amplitude of the jet stream and increasing the amount of moisture in the atmosphere,” explained co-author Jiping Liu, a senior research scientist in the School of Earth and Atmospheric Sciences at Georgia Tech, in a story about the research.

Other scientists have recently found a similar cause-effect link between summer ice loss and harder winters to the south.

“The probability of cold winters with much snow in Central Europe rises when the Arctic is covered by less sea ice in summer,” researchers from the Alfred Wegener Institute reported in January. They “have decrypted a mechanism in which a shrinking summertime sea ice cover changes the air-pressure zones in the Arctic atmosphere and impacts our European winter weather.”

In the new study, the scientists worked through records between 1979 and 2010 and then correlated storm tracks and snow events to the fate of sea ice during the previous fall.

“A decrease in autumn Arctic sea ice of 1 million square kilometers — the size of the surface area of Egypt — corresponded to significantly above-normal winter snow cover in large parts of the northern United States, northwestern and central Europe, and northern and central China,” the scientists wrote in a story about their work.

How does this work? There are two main factors: Loss of sea ice shifts the atmospheric circulation so that it more often delivers frigid Arctic air to the mid-latitudes. And the air in question contains much more moisture due to longer periods of open water in the Arctic Ocean. That extra moisture, in turn, falls as snow.

“The circulation changes result in more frequent episodes of atmospheric blocking patterns, which lead to increased cold surges and snow over large parts of the northern continents,” explained Judith Curry, chair of the School of Earth and Atmospheric Sciences at Georgia Tech, in a story about the paper.

Liu and Curry have also written about another paradox — the increase of sea ice around Antarctica even as the southern ocean grows warmer.