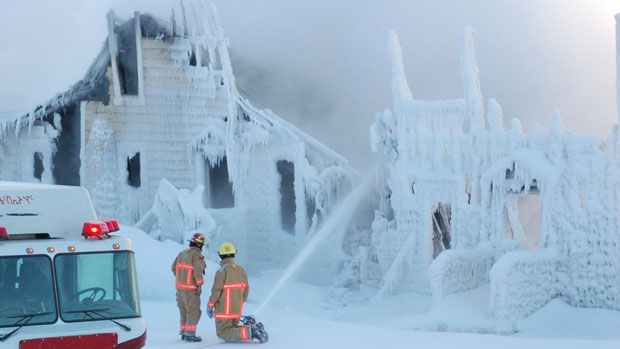 Two people may have died as a result of a fire that destroyed a townhouse complex in Iqaluit, the capital of Canada’s eastern Arctic territory of Nunavut, on Sunday night, a blaze the Royal Canadian Mounted Police are calling suspicious.

Dozens of people were homeless Monday morning after fire raced through 22 units in the 300 block of the complex commonly known as White Row. Some townhouse occupants escaped the fire with only the clothes on their backs.

The RCMP won’t confirm or deny any fatalities, although they are calling the fire suspicious and said they expect the investigation into its cause to take several days. Police add that the entire building has burned to the ground. Forensic Identification Services are flying up to Iqaluit to help the local RCMP investigate.

Flames could be seen from across town at about 10 p.m. local time Sunday. With a wind chill making the temperature feel like –50, firefighters struggled to bring the blaze under control. Some of the water they sprayed froze on contact with the air.

The RCMP tried to locate people who lived inside the complex and send them to the Frobisher Inn. Mayor Madeleine Redfern said Arctic College was also providing space. Twenty of the 22 units in the complex were leased to Arctic College as student housing, according to officials.

Nearly all the displaced students had housing as of late Monday afternoon, college officials said. The other students were lodged in a local hotel.

The mayor also tweeted that the Red Cross and the City of Iqaluit would be available to provide support for the victims.

Bystanders said the fire started around 9:30 p.m. Sunday. There was no official word on the cause.

Louisa Meeko said her two boys were still in their shorts when they ran out of the building.

“We just left the house, put on our jackets, but it was cold and windy,” Meeko said. “I had to go back and get their windpants.”

The community is rallying together to help those affected by the fire. More than 50 of the homeless are children aged five months to 18 years old.

“It’s been overwhelming. You know, the community always reaches out to help each other. At times of great need like this people are asking where they can donate clothing, bedding as well as cash,” said Redfern.

The Nunavut Research Institute and the post office are accepting donations of goods and money for the displaced. The most needed items are clothing for children, youth and adults, personal hygiene supplies, towels, bedding, baby items including bottles, formula and diapers, and non-perishable foods.

The institute is asking that all donated items be in good working condition and clothes recently laundered. Cash and gift cards to stores are also being accepted.

Donations are also coming in to the airport in Ottawa, where many Nunavut travellers pass through. Airline First Air is also offering free shipping of supplies to Iqaluit.

All but one of the destroyed units were being leased by Nunavut Arctic College. In a statement, the college’s president Michael Shouldice said they are working to meet all the affected residents’ immediate needs.

Shouldice added that the college will arrange permanent housing as soon as possible.

“Going to college has its challenges, and something like this is a real setback, so we want to get these families settled into new housing as soon as possible,” said Shouldice.

He added the college will be meeting with the families to get a better understanding of their needs.

Federal health minister and Nunavut member of Parliament Leona Aglukkaq issued a statement Monday afternoon saying she is thinking of the residents, adding that it’s important to find strength as a community.