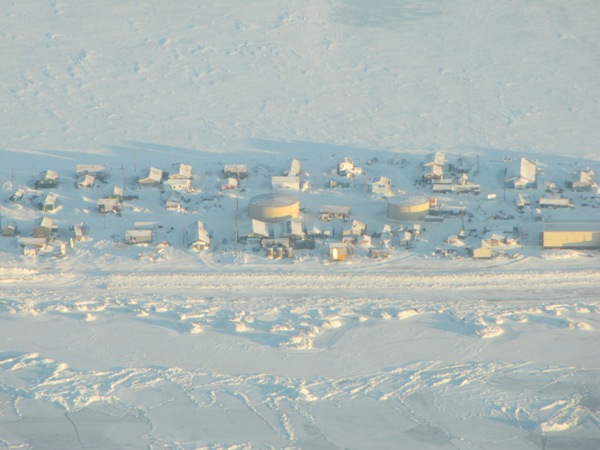 Another Alaska city buried in snow has declared a disaster. Only this time the pounding has not come from the sky, but from ground blizzards blasting the Arctic coast.

Howling winds from the north have helped pile snow on roofs of some Kivalina homes and buildings, walling off exits, covering stove exhaust outlets and shutting off access to emergency buildings, said officials in the village of 375.

“There’s one house that you have to look down to see their entrance,” said Marilyn Swan, city clerk.

“The snow bank is level to my brother’s house and the electrical lines you could walk up to them and step on them.”

One woman worries the mounds will crush the weak walls of her house, said Janet Mitchell, city administrator. Volunteers have helped people shovel free, but a broken snowplow and lack of money have hobbled city response. The seven-person city council declared a disaster last week, requesting help from the Northwest Arctic Borough. The borough denied the request after consulting with state Homeland Security and Emergency Management, but provided $1,000 to help pay fuel, labor and other costs for clearing public roads and buildings, said Bobby Schaeffer, public services director for the Kotzebue-based borough.

“When it blows from the north, it blows pretty strong,” he said of Kivalina, an Inupiat village known for its crumbling coastline and a climate-change lawsuit against Big Energy. “Even though no snow is falling, the entire town becomes like one big snowbank.”

Homeowners are on their own for clearing snow off roofs and away from exhaust pipes that are often on the sides of houses. “We looked at what we can afford, but we’ve had so many water and sewer disasters this winter, we’ve pretty much exhausted the disaster relief fund,” Schaeffer said.

Snow has hammered much of Alaska this winter, including Cordova, where the National Guard troops helped the community tunnel out of January storms. In Northwest Alaska, winter has featured extreme cold not seen in years, said Harry Lind, a National Weather Service station manager in Kotzebue, about 80 miles southeast of Kivalina.

Cold snaps, including one down to minus 50 degrees F, helped freeze major pipes in the villages of Selawik and Noatak, said Schaeffer. The borough has spent thousands of dollars from its disaster relief fund to help repair damage in those communities. In each village, flush toilets broke down for about two weeks, and the water stopped working in Selawik as well, forcing residents to revert back to using honey buckets and hacking through frozen ice for water.

The borough also denied a request for a disaster declaration from Selawik, Schaeffer said. Lack of a sanitation system raised health concerns in both villages, but residents adjusted, taking extra care to wash hands and stay clean.