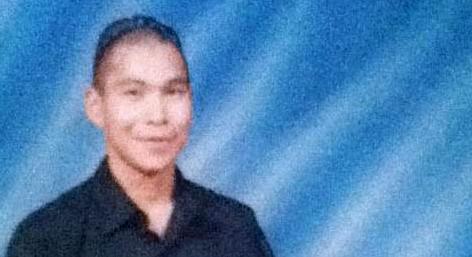 One of the latest to take his life was Gusty Gusty, a 22-year-old with a third child on the way. He died in Stony River in March, where the school is so small it may close this summer.

Students there are raising money for a two-week trip to Washington, D.C., later this month.

They took a similar trip to southern California last year.

Organizers see the excursions as one way to reduce suicides in the region by teaching students about colleges, careers and other opportunities outside the village of 34.

But Gusty’s death showed there’s no magic solution to rural Alaska’s suicide epidemic, which is often the biggest in the nation.

During a quiet day in late March, with snow piled high on roofs and the temperature around zero degrees, Dusty leaned against the doorway to his house and jiggled a baby boy in his arms. He wouldn’t talk much to me, a reporter covering the school’s fundraising efforts and its possible closing. But in a glum voice, he said that years earlier, he and classmates at the Gusty Michael School raised money and made a similar learning trip to California.

Five weeks later, on April 28, he shot himself to death in his house with a single bullet from a .22 pistol, state troopers reported. An older sister said he was forlorn and had been drinking in the days leading to up to his death.

Gusty’s is one of 11 confirmed suicides in more than 50 villages spread across the Yukon-Kuskokwim Delta since Jan. 1, said officials with the Yukon-Kuskokwim Health Corp., the tribally run hospital created to serve Alaska Natives in the Bethel region.

The deaths have occurred in separate villages. Unlike past waves that stole mostly young males, the suicides this time largely involved older males, officials said.

Hooper Bay, Alakanuk, Emmonak and Mountain Village near the Yukon River mouth have each had a suicide. They’ve also struck Nunapitchuk, Tuntutuliak, Napaskiak, Akiak, Tuluksak, Aniak and Stony River, villages along or near the Kuskokwim River to the south.

The region is home to about 25,000 residents. The same rate of suicide in much larger Anchorage would produce 132 deaths during the same four-month period.

The Bethel-based hospital and other state, federal and tribal groups continue to respond to the villages to help family and friends heal and grieve, said Rose Domnick, the hospital’s director of prevention, and Donna Bach, spokeswoman. Part of the effort involves communities developing plans to stop risky behaviors, such as illegal drinking among youth.

Other prevention efforts are happening in Bethel, a hub community of 6,300. The city will hold a Walk for Life on Friday, a now-statewide effort that grew out of a movement in Northwest Alaska following a rash of suicides in that region in 2009.

Also, in the coastal village of Hooper Bay, the hospital and other organizations will hold a workshop addressing suicide May 12-14. Participants will discuss generations of historical trauma suffered by Alaska Natives and consider traditional and modern ways to heal, Domnick said.

The mostly Yup’ik Bethel region has a long history of suicide, including a streak involving several teens who killed themselves during the spring and summer of 2010, which prompted U.S. Sen. Lisa Murkowski to organize a summit to hear from young voices. They called out for more parental involvement.

Elders have told Domnick there is no easy fix to suicides, especially because much of the pain Alaska Natives experience is rooted in the past.

“There is nothing magical, no pill, nothing that is going to change anything overnight. This will have to be a process, and who we came to be today has a lot to do with the last 150, 200 years. Slowly we have been losing so much that traditionally taught our people to grow into healthy human beings.”

Native languages have faded. There’s less of the traditional dancing and other celebrations that helped people bond as Alaska’s endless winters dragged on.

This time, the youngest victim was 17, but other victims are older men, ranging in age from 19 to 48, said Domnick. That teens are taking their lives less may indicate that prevention efforts aimed at young audiences are having an effect.

“So (now) we need to do something to reach everyone,” Domnick said.

The usual culprits seem to be at play in this year’s suicides, such as the region’s chronically high unemployment and poverty, as well as family problems and alcohol and drug abuse, Bach said. Also, crippling fuel prices and the extremely severe winter, with its bitterly cold snaps, seems to have prevented some people from hunting as much as they normally would, she said.

In the case of Gusty Gusty, suicide may have been something he learned from his older brothers, said a sister, Jeanie Gusty, who lives in Anchorage. Gusty Gusty, named for his late grandfather and village leader Gusty Michael, was the third sibling of seven to take his life, said Jeanie.

An older brother, Kenny Gusty, killed himself in 1995, shortly before Jeanie’s high school graduation. Another brother, Michael Gusty, took his life in 2001. They were in their early 20s, like Gusty Gusty.

Jeanie remembers little Gusty Gusty crawling into bed to sleep beside her when she was in high school in Stony River.

He was fun to be around, and had a great smile that lit up when she returned home to Stony River, she said.

“I think the day he died, he got geese or ducks for my mom and dad just that morning,” she said.

She went to his funeral last week in Stony River. Her parents, Andrew Gusty and Mary Macar, are crushed, along with his girlfriend, Alyssa Willis, who is weeks away from delivering their third child, Jeanie said.

“Now we have to move forward and pick up the pieces,” she said. “And thank God he wakes us up every day.”

Resources are available at the Statewide Suicide Prevention Council site. Also, a new foundation in Bethel, created by a father who lost a son early last year, is one of several efforts raising awareness about suicide prevention.