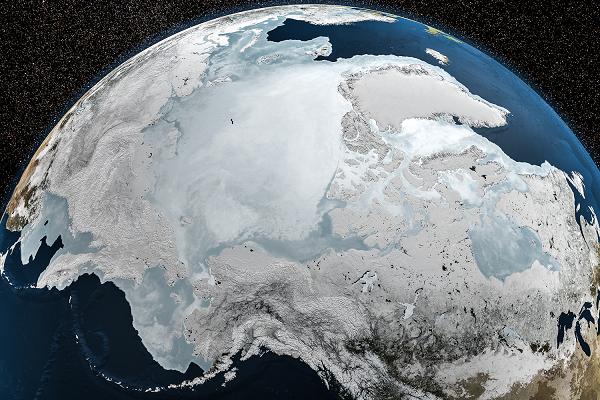 Slap on a chunk of ice nearly the size of Texas.

The extent of frozen floes on the polar ocean covered more territory than any April since 2001. It spanned about 5.7 million square miles, almost matching the average pack size for the month seen during the past 34 years.

To put that in perspective, the frozen ocean included about 240,000 square miles of extra turf compared to the same month in 2011 — an area almost the size of Texas.

Is this good news? Has the decades-long decline of Arctic sea ice been interrupted? Not at all, according to the satellite jockeys at the National Snow & Ice Data Center.

“Arctic sea ice extent declined slowly through the first three weeks of April, compared to recent years,” reports NSIDC’s May update. “However, much of the extensive ice cover is thin ice that will melt quickly once temperatures rise in the Arctic. Over the past week, extent has started to fall sharply.”

The polar ice cap plays an essential role in stabilizing the world’s climate, but has been shrinking to record and near record levels during the summers for the past decade. This loss speeds up global warming and thinning of existing ice because darker open water absorbs more solar energy than reflective white floes.

The brutally cold temperatures that dominated Alaska’s Arctic all winter created extensive new ice in the Bering Sea. In fact, a record recently fell at the Pribilof Islands off Alaska’s western coast, which have now been surrounded by sea ice for more days than in any other winter on record. St. Paul has been iced in for 103 days, the National Oceanic and Atmospheric Administration reported Thursday; the previous record was 100 days. Meanwhile, St. George was surrounded by sea ice for 79 days during the winter of 2011-12. That broke the previous record by 19 days, NOAA reported.

Elsewhere in the Arctic this winter, ice was also above average in Baffin Bay. Sea ice cover was above-average in the Sea of Okhotsk. All this ice persisted through early April — declining at a rate about 10 percent slower than normal — boosting the monthly tally into average territory for the past 34 springs.

And yet, despite the slow start to the 2012 melt season, this remaining ice cover almost certainly will be fleeting, the snow and ice data center explained here. Very little of the ice was thought to consist of those royal-blue, multi-year floes that once dominated the Arctic, although no one has a real-time measure of ice thickness.

NASA has been sending out an airplane taking measurements over some areas and will ramp up an ice-thickness program by 2016. The European Space Agency’s orbiting CryoSat has also been monitoring ice thickness but doesn’t produce daily updates for the general public. Last week, the European Space Agency released a calibrated map showing the changes in polar ice girth between October 2010 and March 2011.

The most recent estimate of ice volume — the surface footprint plus all of the ice hidden beneath the surface — remained at some of the lowest levels for any month since 1979. As of March 31, the total mass of Arctic ice was thought to be even smaller than the minimums seen during every melt season through 2009, with only the summers of 2010 and 2011 containing less total ice, according to the latest calculations posted by the Polar Science Center at the University of Washington.

Aside from the meager volume and thickness of the ice, spring conditions generally make lousy harbingers for the pack’s late-summer fate, say the snow-and-ice satellite watchdogs.

“While ice conditions approached the 1979 to 2000 average levels for this time of year, the high ice extent will have little influence on how much ice melts this summer,” the NSIDC pointed out in the update. “Research has shown that sea ice extent in spring does not tell us much about ice extent the following summer. More important to the summer melt is the thickness of the ice cover, and summer weather.”