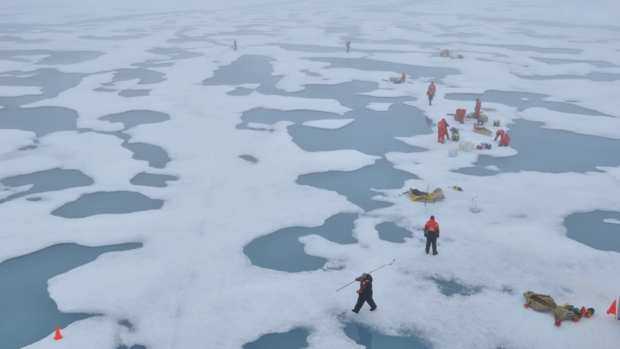 A group of U.S. scientists has discovered enormous blooms of algae growing in an area of the Arctic Ocean that they never thought could support the phytoplankton: below the sea ice.

The discovery was a shock because living organisms don’t usually survive underneath the ice pack that covers parts of the Arctic Ocean for much of the year and blocks out the light needed to sustain life.

“First, we were thinking, ‘This can’t be. This can’t be possible. There’s no way this can be what it looks like,'” Kevin R. Arrigo, a biological oceanographer at Stanford University in California and lead author of the study, told CBCNews.ca. “Then the next thing was: ‘Has anybody seen this before?'” 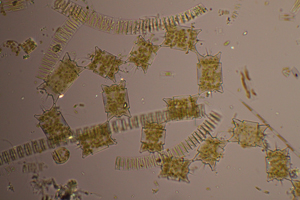 Arrigo and his colleagues had certainly never seen anything like it on past Arctic expeditions.

“Typically, what we find when we sample the ice is that occasionally, there’s things inside the ice, but there’s almost no biology below the ice,” Arrigo explained in a separate interview on the website of the journal Science, where his team’s findings were published last week.

“The ice is a real effective barrier to light, and, generally, things just can’t grow underneath it.”

But in recent years, Arctic ice has been thinning and receding because of climate change, and the thriving algae blooms could be one consequence of that change.

Phytoplankton are single-celled organisms that although technically not plants, behave like plants, transforming carbon dioxide into carbon, sugars and other molecules that feed an entire marine food chain. Different species of it are found all over the world although the polar species that Arrigo and his colleagues found is adapted to the cold conditions of the Arctic and is only found there.

Phytoplankton and the process of photosynthesis they carry out support entire microbial communities within their blooms, organisms such as ciliates, protozoa and zooplankton that in turn feed other animals.

The tiny algae are a key part of a complex food chain that could be altered significantly if, indeed, the thinning of the Arctic sea ice is causing algae blooms to become more abundant and appear earlier in the year since many Arctic animals organize their migrations and life cycles around the times when food is most abundant.

“If it turns out because this ice is retreating, because the ice is melting and thinning, that these blooms are happening earlier and earlier in the season, it may make it more and more difficult for these organisms to adapt and to make sure that they can time themselves so that they are there when the food is most plentiful,” Arrigo said in the Science interview.

Arrigo and his team came across the blooms in July 2011 while in the Arctic as part of a broader research project known as ICESCAPE( Impacts of Climate on EcoSystems and Chemistry of the Arctic Pacific Environment).

As their research vessel travelled through the Chukchi Sea between Alaska and Russia, it broke up the retreating ice pack, and the scientists were able to take water samples from different depths below the ice. They found massive blooms of phytoplankton not just growing but thriving under the ice and extending far along its underside.

On average, they found four times as much algae underneath the ice as in open water.

What surprised them was not just the amount but also that the algae was most abundant close to the bottom of the ice layer.

Usually, algae blooms are found at depths of about 25 to 30 metres below the surface, Arrigo said, but the scientists measured blooms as close as two metres below the ice surface, near the interface of the bottom of the ice layer and the water underneath.

The ice itself was between 0.8 metres to 1.3 metres thick , and the blooms beneath it extended to variable depths — anywhere from about 30 metres to 70 metres below the surface of the ice.

“Normally, you find blooms along the edge of the ice,” Arrigo told CBCNews.ca. “But it wasn’t until we got, literally, into the ice that the concentrations got really high.

Two of Arrigo’s main fellow algae researchers on the trip were Donald K. Perovich of the Cold Regions Research and Engineering Laboratory and the Thayer School of Engineering at Dartmouth College, both in New Hampshire; and Robert S. Pickart of the Woods Hole Oceanographic Institution in Massachusetts.

Arrigo was primarily in charge of analyzing the water column while Perovich oversaw sea ice operations and Pickart analyzed the data from a physical oceanographer’s perspective.

When the scientists measured how much carbon dioxide the phytoplankton were photosynthesizing, they found that the algae blooms that were growing underneath the ice, where there is less light and water is colder, were growing twice as fast and were 10 times as productive as algae in open water.

Arrigo suspects that’s because the unique environment under the ice is the ideal habitat for polar phytoplankton, which are used to frigid temperatures and low light.

There are three key ingredients in this perfect recipe that have to be present in order for algae blooms to grow under Arctic sea ice:

Owing to climate change, more and more of the Arctic Ocean is first-year ice rather than multi-year ice. In fact, Arrigo said his team didn’t come across any multi-year ice at all in the Chukchi Sea during their voyage.

This development means that the kind of blooms that Arrigo and his colleagues stumbled upon could become more common and could start appearing earlier in the year.

“We know 25-30 years ago, that exact same area where we made this discovery was three-metre thick ice, with a snow cover on top, probably not that many melt ponds, and there wouldn’t have been enough light being transmitted to the ocean to get a bloom then.

“Since then, the Arctic has lost a lot of that thick, multi-year ice. It’s mostly first-year ice now, which is a lot thinner.”

It’s hard to say how long these enormous algae blooms have thrived under Arctic sea ice because few researchers venture directly into the ice pack to take measurements, Arrigo said, and although some have measured high chlorophyll concentrations below the ice that might have indicated similar blooms as Arrigo and his colleagues found, Arrigo has yet to hit upon research that has described them as such.

The researchers’ next challenge will be to do a more exhaustive study dedicated solely to studying the blooms and their effect on the surrounding ecosystem.

“We want to figure out how widespread these really are,” Arrigo said. “We also want to find out what their role is in terms of the ecology of this system, because we don’t understand that all.

“What’s happening to all the carbon that’s being produced by these things? Where’s it going? Who’s eating it? Who’s benefiting from these blooms, or who’s maybe suffering from these blooms? So, there’s a lot of questions to be asked now — and answered.”